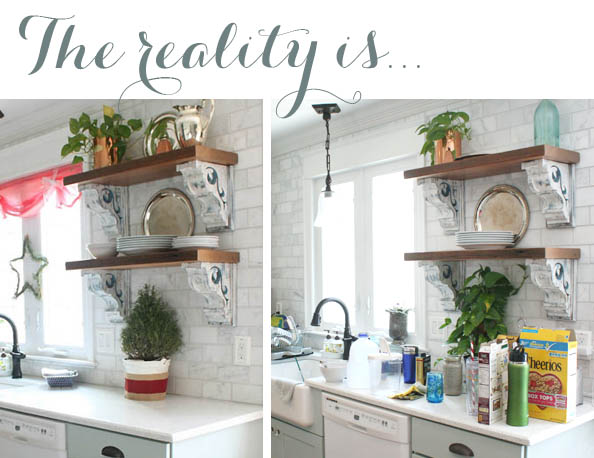 The reality is that what you see on TV and magazines isn’t real life. We all know this, but do we tend to forget after a while?

I was watching one of those popular HGTV reality shows the other day. This one happened to be filmed in our neighborhood, so I was very familiar with the home that was being renovated. I drove by the house several times while the work was being done and I only saw the show hosts there three times. Those were the few days that filming was being done. The rest of the time (many months of renovating) I never saw the hosts. But, I’m sure you probably already realized this fact. It’s understandable, the celebrity hosts have to record other shows. And there’s no reason for them to stick around and watch joint compound or paint dry.

As you can imagine, I couldn’t wait to see the episode. Before the show aired I ran into the homeowners while walking our dogs. We chatted for a while and I thought they were a super delightful couple. Both polite, kind and fun to talk to. They both shared my love for our neighborhood. When the show finally aired last month, I was dismayed to see this young couple turned into picky, hard-to-please homeowners that fit into the “script” of the show. But, what surprised me most was the final reveal of the “new” value of the improved house. The home was valued above homes almost 1,000 sq feet larger in similar condition in our neighborhood. I shouldn’t have cared much. But, I did.

I’m not sure why I was feeling anger. I’ve known for a long time that reality tv isn’t really reality. Maybe I was angry because I see too many photos and TV shows that portray “real” people living in perfect homes. I think I was angered because the more we watch, the more we read and the more we pin — we begin to forget that what we see isn’t reality. I think we all need a reminder about how unreal “reality” is. END_OF_DOCUMENT_TOKEN_TO_BE_REPLACED 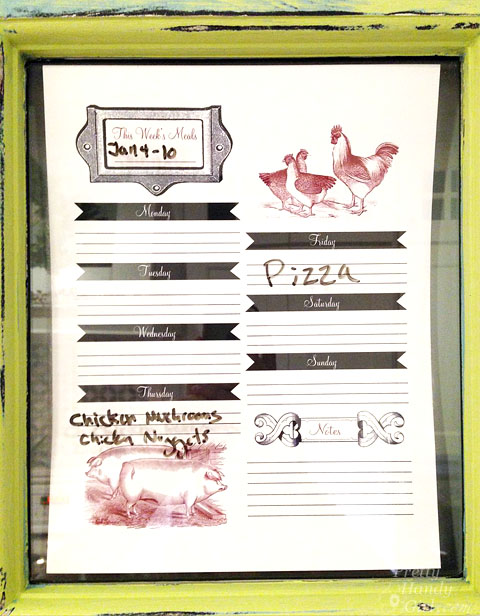 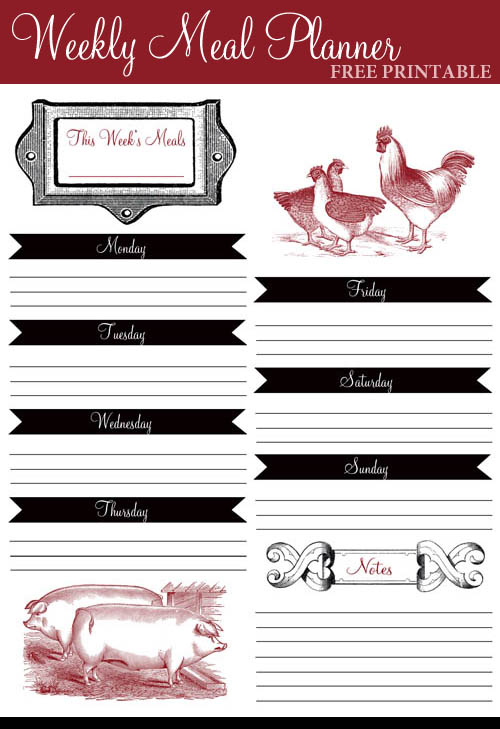 Last week as I was showing you our new Family Organization Center Door, you probably saw this cute Vintage Farm Weekly Meal Planner: 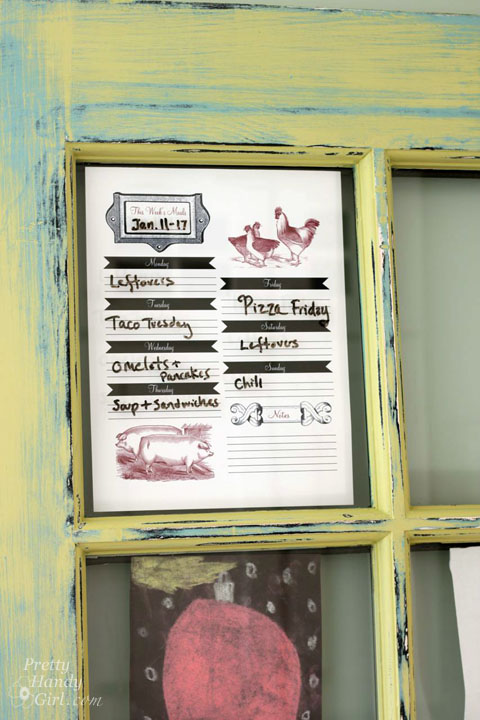 I created this re-useable meal planner with some beautiful vintage graphics from The Graphics Fairy. She has an entire library of vintage images in black and white and color! Including these images I used: pigs, chickens, metal frame, banner scroll. The menu fits in the Organization Door behind the glass so we can use it like a dry erase board.

Want one for yourself? I’d love to share the menu planner with you.

Have a great week! 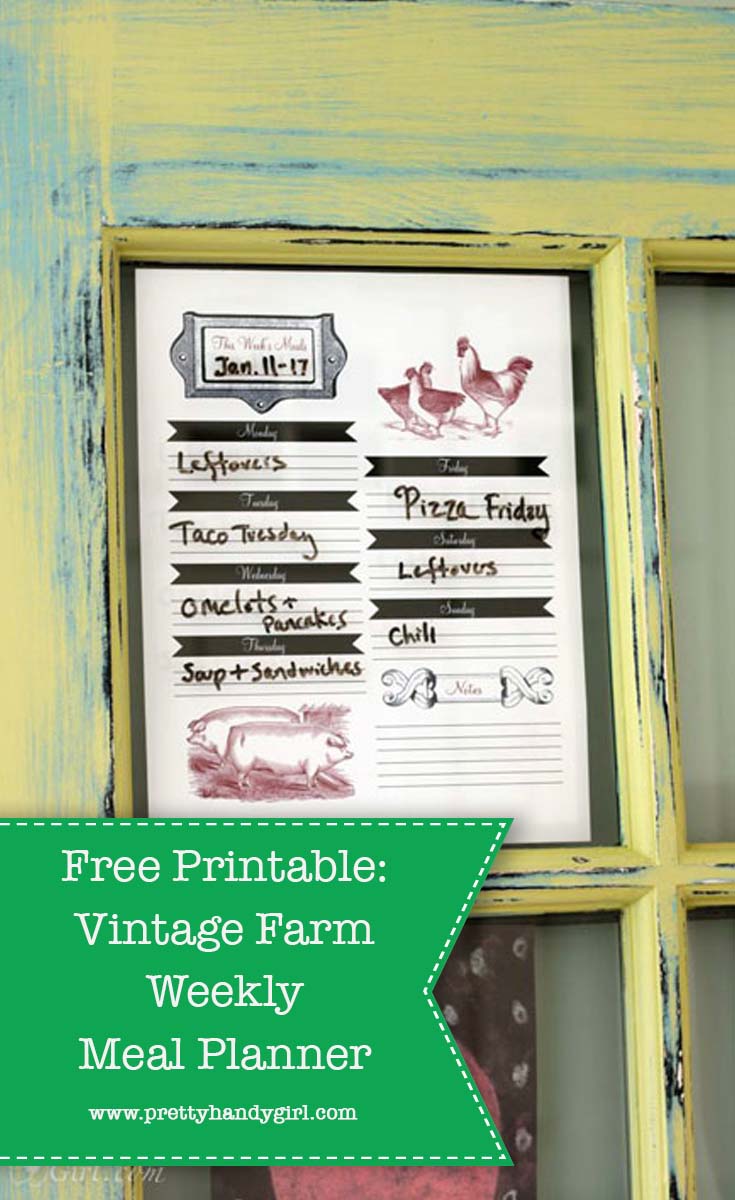 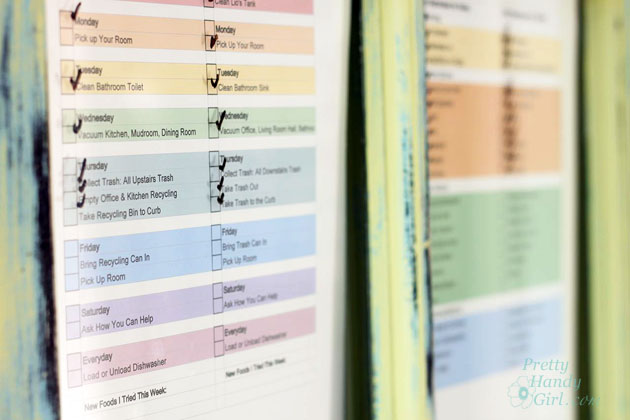 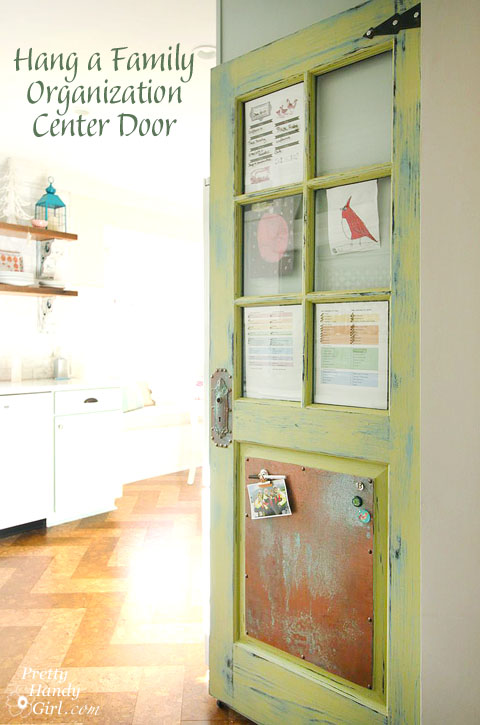 It’s hard to stay organized when you are a DIY blogger, Mom, wife, cook, cleaner, taxi driver, and a student (taking evening classes for the general contractor exam.) I’ll be the first to admit that I’ve dropped a few balls in this massive juggling act. But, I strive to improve and part of that effort involved hanging a Family Organization Center Door next to the refrigerator.  Did you know there was such a thing? Ha, me either until I saw this half window door at our local Habitat ReStore. 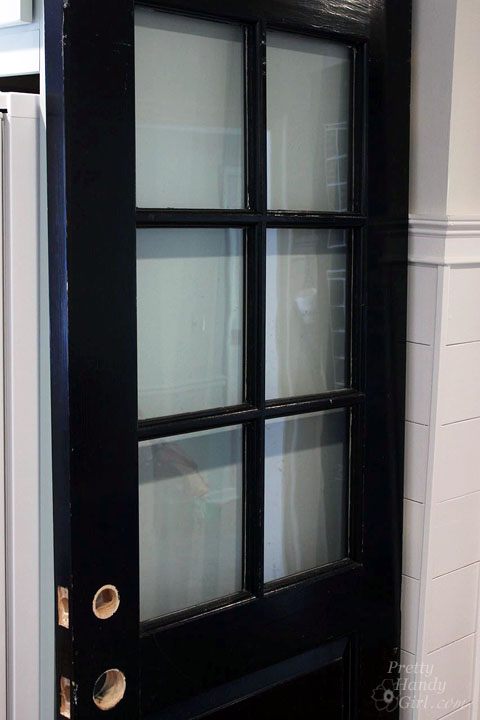 A vision of a place to plan meals, keep track of chores and keep reminders became clear in my head when I first saw it. Want to see how I took this old door and turned it into a family organization center? Hang around for a few minutes to find out.

After finding a door for your organization center, you may need to trim down the sides to fit your space. I had to trim an inch off each side of my door to fit on the side of our refrigerator cabinet. Use a circular saw to trim the door. Using a Kreg Rip Cut will help keep the saw straight. 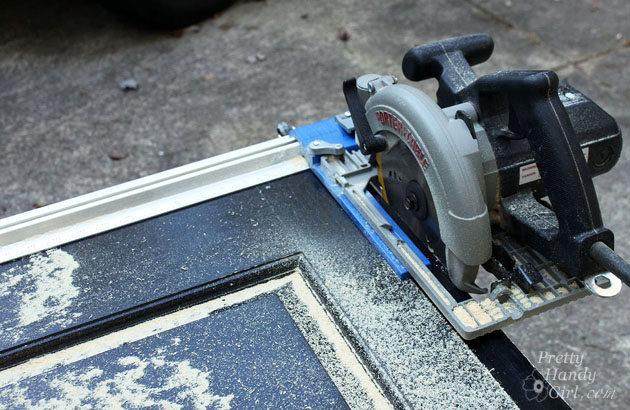 For extra stability, you may want to add a caster on the bottom of the door (opposite the hinge side). This is not necessary, but will add extra support. 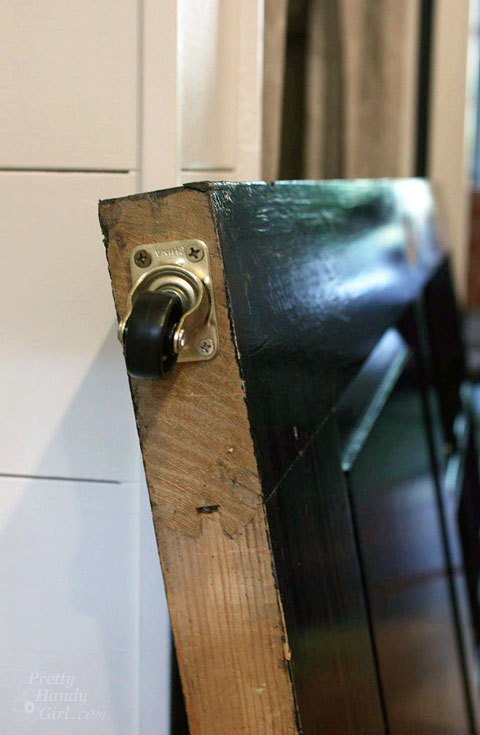 Cut scraps of coax cable to fit into the tops of the windows. END_OF_DOCUMENT_TOKEN_TO_BE_REPLACED 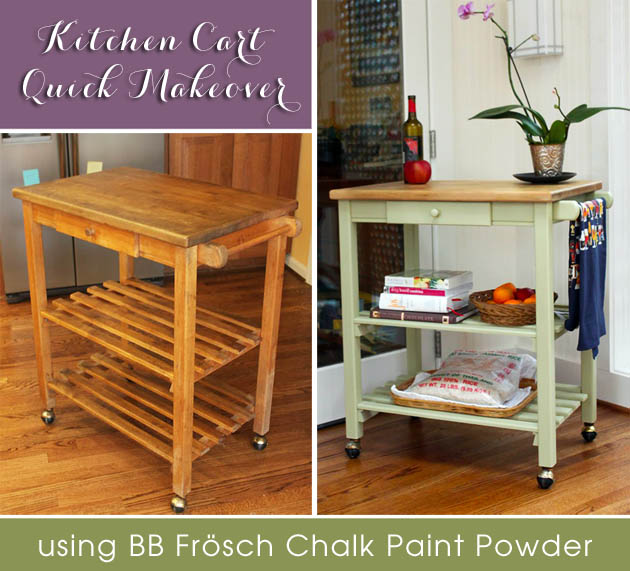 It seems I have a penchant for painting my late grandmother’s old furniture. You may remember the coffee table I wrote on of her’s. This kitchen cart was Grandma’s, but it had seen better days. It has been hanging out in my Dad’s kitchen for years now. My sister Caitlin decided to rope me into giving this kitchen cart a quick makeover over the holidays. 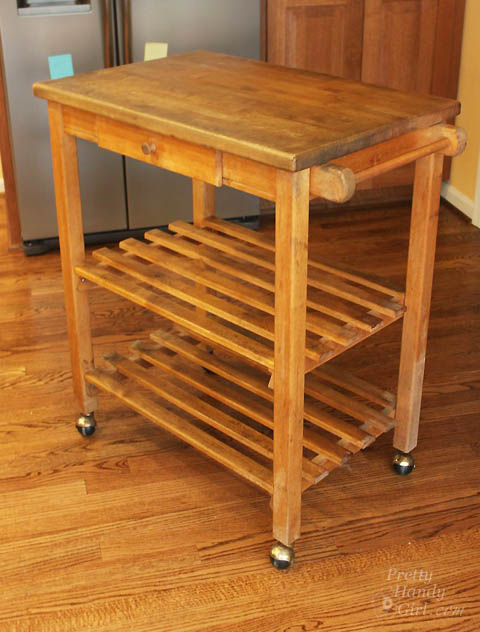 It actually turned into the perfect opportunity to try BB Frösch Chalk Paint Powder. The powder is mixed with water first and then any flat latex paint to create a smooth, durable chalk paint that can be painted directly over any surface regardless of whether it is bare wood, metal, or previously painted. Primer is not needed! For a soft durable finish, you can add a coat of BB Frösch Clear Wax. 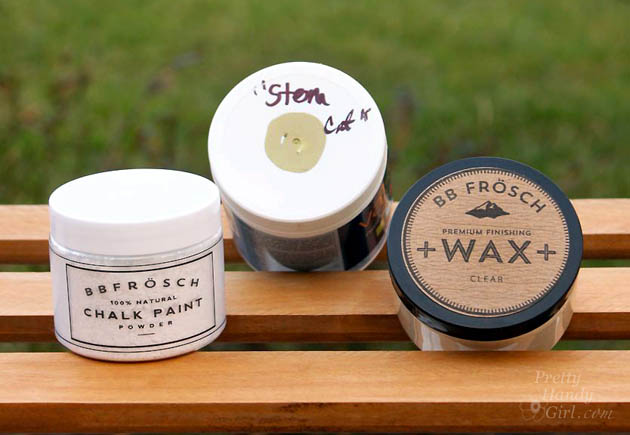 I can’t wait to show you how this chalk powder works and how quickly you can give furniture a makeover. 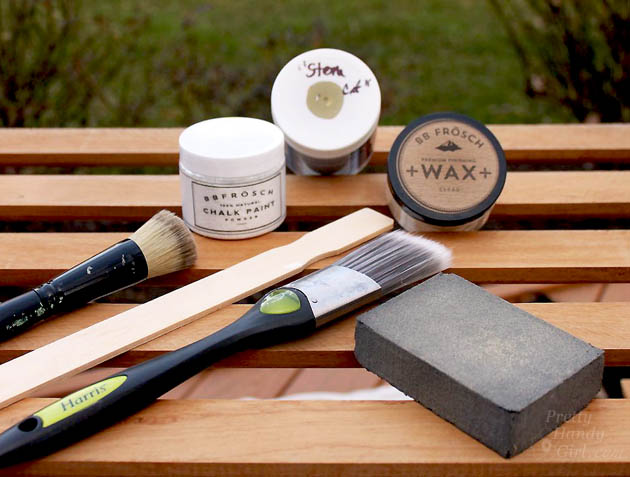 Begin by wiping off your kitchen cart with the damp rag. 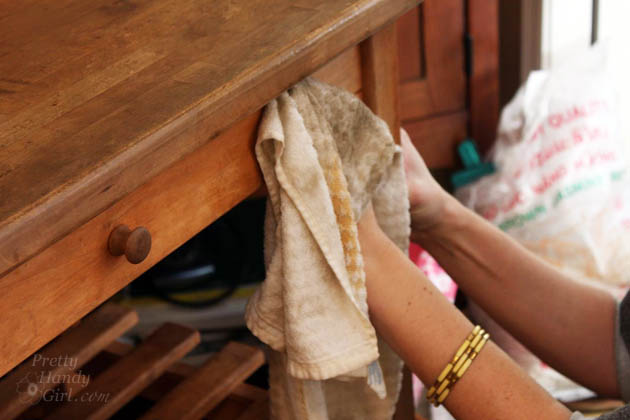 To remove the butcher block top, turn the cart upside down and remove the screws holding the top in place.

Lightly sand the rest of the cart with a sanding block. It helps to enlist the help of one adorable niece for this step. END_OF_DOCUMENT_TOKEN_TO_BE_REPLACED 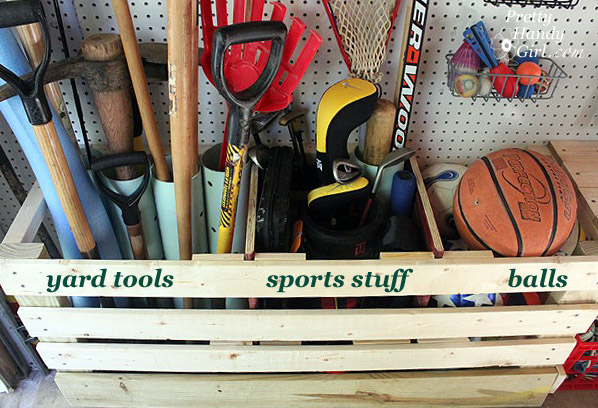 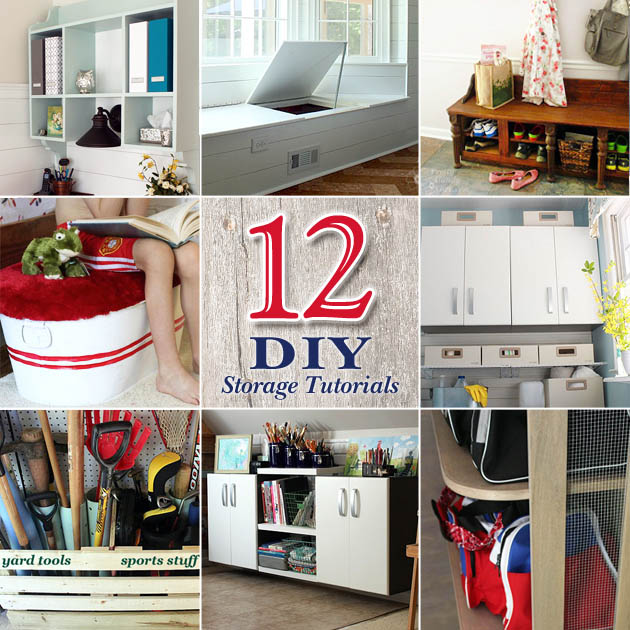 It’s January and you know what that means! Time to clean and purge the house of all the excess stuff. Last year I was too busy with projects to purge, so this year I’m taking advantage of some warmer days to clean out our home. I hope you’ll excuse me while I’m in clutter busting mode. In the meantime you might enjoy these 12 DIY Storage Projects to help you organize your home (and hide clutter.) 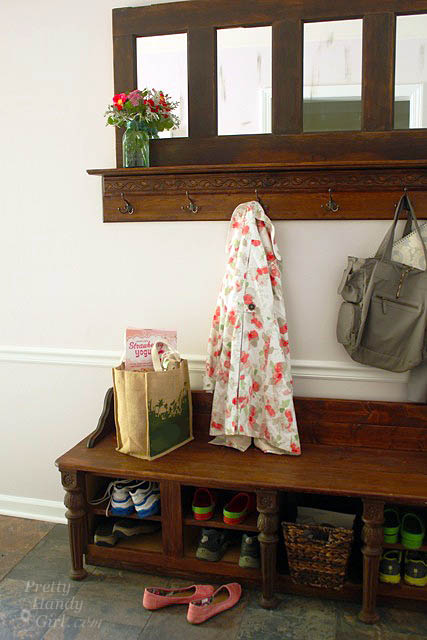 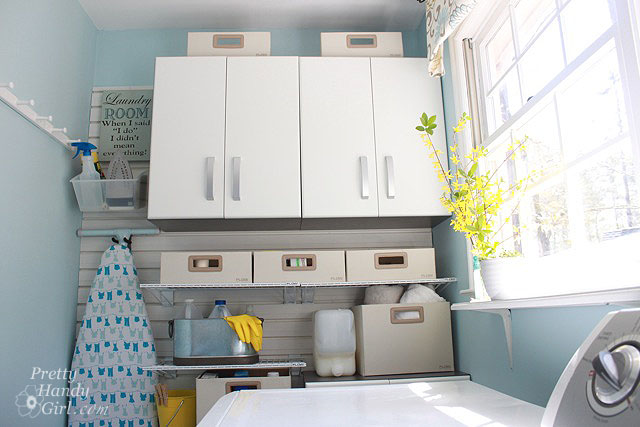