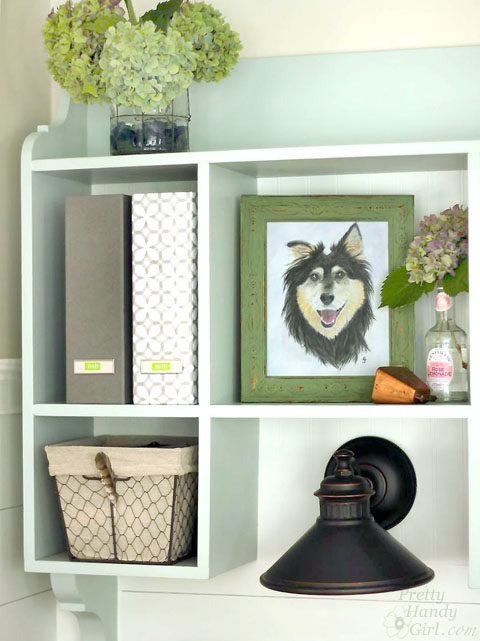 Hey y’all. Did you miss me on Friday? I missed you! It’s been quite a week, so I hope you don’t mind if I step away from the DIY tutorials today to share a little news from my personal life. 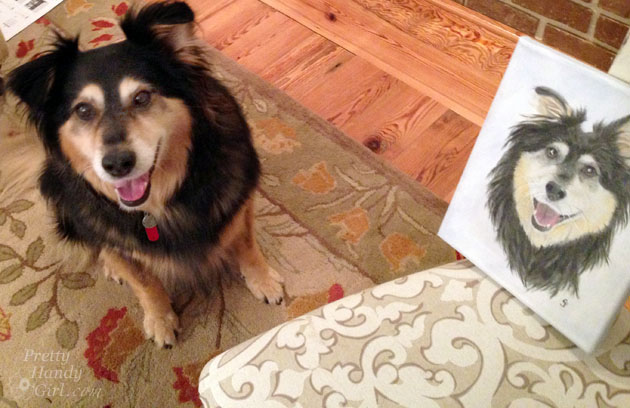 About two months ago, I received a sweet gift from a good friend. Colleen from Just Paint It created this beautiful custom portrait of Buddy aka Handy Dog for me. At the time, I was ecstatic, but little did I know that in less than a month this would be the only image I had of a smiling Buddy. Keep reading, this story does have a happy ending…I promise. 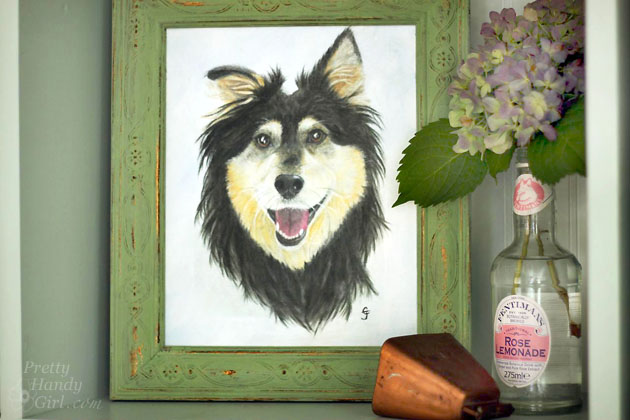 Buddy had been dealing with GI issues since the spring and our vet wasn’t sure what was causing them. He had been on a few meds (for an intestinal worm and for swallowing creek water) that we suspected threw his stomach into a tail spin (no pun intended.) As time progressed, he went from bad to worse. I knew he didn’t feel well and I could tell he was in pain. In an effort to keep from giving you TMI “to much information…thank you very much.” He ended up pushing his insides out. My sweet happy boy had slowly deteriorated and he was less and less of the happy dog we used to know. He also began losing weight.

Still we struggled to find a cure for his illness. Finally our vet recommended taking him to the North Carolina State University vet school. (We are soooo incredibly grateful that we live in the same city as this fabulous resource!) The NCSU vets ultimately decided it was best to proceed with a colonoscopy. Although the procedure was costly, it was the best way to figure out what was going on inside his digestive tract.

I was in agony as I awaited the phone call from the vet. Plus, I was mentally preparing myself for a cancer diagnosis. When the phone finally rang I could barely believe my ears when she told me that it was mostly inflammation and possibly IBS or a food allergy. But, she said he had a large polyp that needed to be removed and then sent to pathology. (So cancer still wasn’t ruled out, but it was less likely.) The surgery was scheduled for a week later.

Within days of the colonoscopy, things went from worse to really bad. Buddy was not doing well and his pain was getting worse. I called the vet school and begged them to put us on a cancellation list for the surgery. As luck would have it, they did have a cancellation and he was admitted on Tuesday.

On Wednesday he had the surgery to remove the polyp and was released on Thursday. And this is what greeted me as I was reunited with my dog: 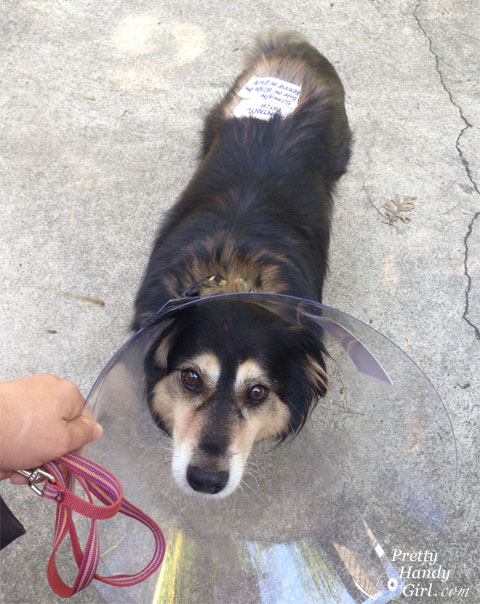 I tried not to laugh…really I did. But, tell me you can’t giggle a little at this poor dog who has a gigantic cone (too big for him) and… 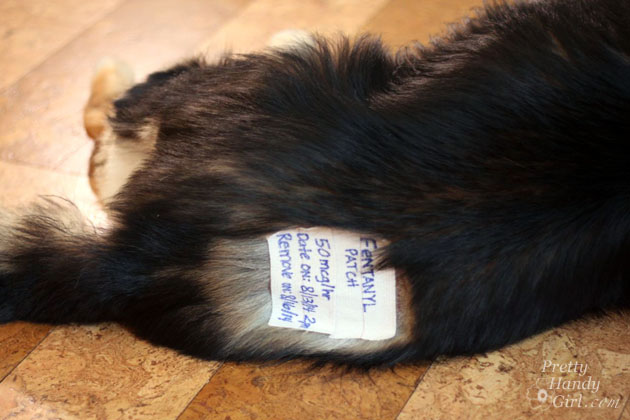 …a shaved backside with writing on the bandage. (The patch is a pain med that is slowly released over the course of 72 hours.)

Now that he’s home, he has been resting a lot. I found a more comfortable e-collar for him at PetSmart. But, I still have to put the cone on him at night and when we leave him alone because he’s quite crafty and can figure out how to get around it. 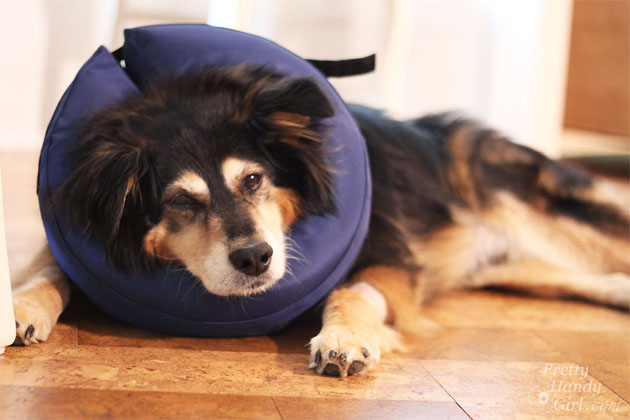 He hasn’t wanted to venture out much (I think he’s a little embarrassed by his appearance) but when I took him for his walk I saw something that had been missing pre-surgery. He had a bounce in his step! That’s when I knew that he was feeling much better. 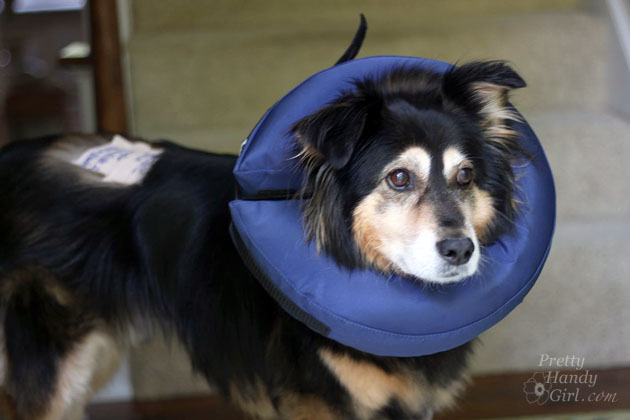 I’m so grateful for the talented surgeon and vets at the vet school and hope that we’re on the road to recovery. (I’ll know more next week when the biopsy results come back and if he begins to gain weight.)

I’m also grateful for sweet friends like Colleen who captured my dog’s happy personality in a portrait. You can read and view her process for creating his portrait on her blog.

How you can get your own custom pet portrait from the very talented Colleen?  To start the process, visit her Etsy shop: 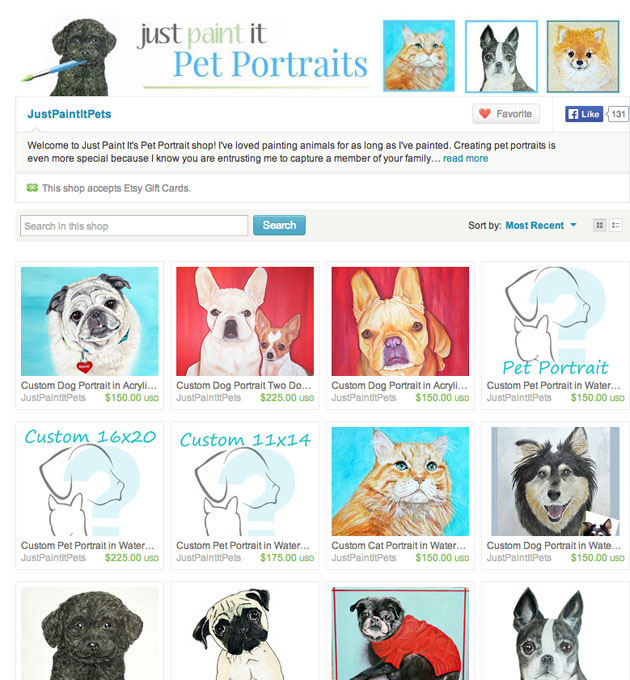 Then select your portrait size, number of animals, and the medium (Acrylic, Watercolor, Colored Pencil, Ink or a combo). Colleen will contact you to request a photo (or more) of your pet. She will create a beautiful portrait that captures your fur baby’s personality.

This was the photo she used of Buddy and the final painting: 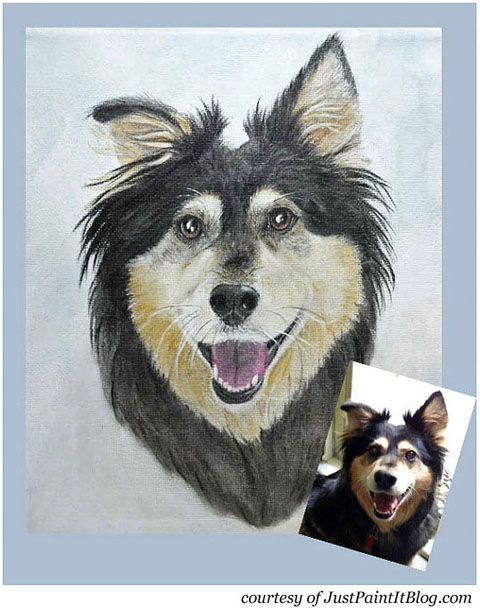 Now our portrait is displayed in the kitchen hutch I built. The details and fine lines in the fur and his smile are amazing! 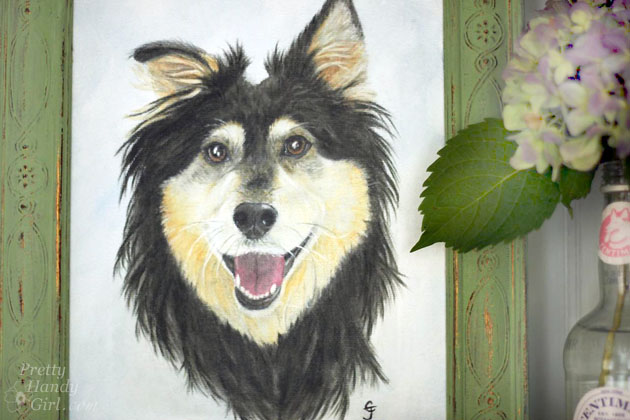 It’s a nice reminder of how grateful we are to have adopted this sweet stray who came to us three years ago. And what a sweet and happy dog he is when he’s feeling well. 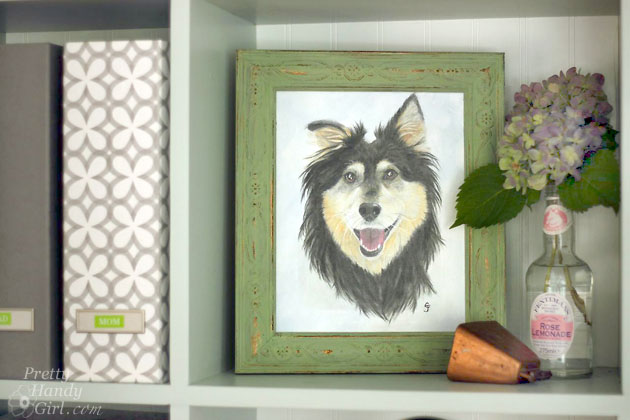 A pet portrait would make a perfect Christmas or Birthday gift for someone! Don’t wait because her portraits are created on a first come first serve basis and this is a great price for a limited time.

Beef Up Door and Window Casing with Back Band
Scroll to top
We use cookies to ensure that we give you the best experience on our website. If you continue to use this site we will assume that you are happy with it.Ok