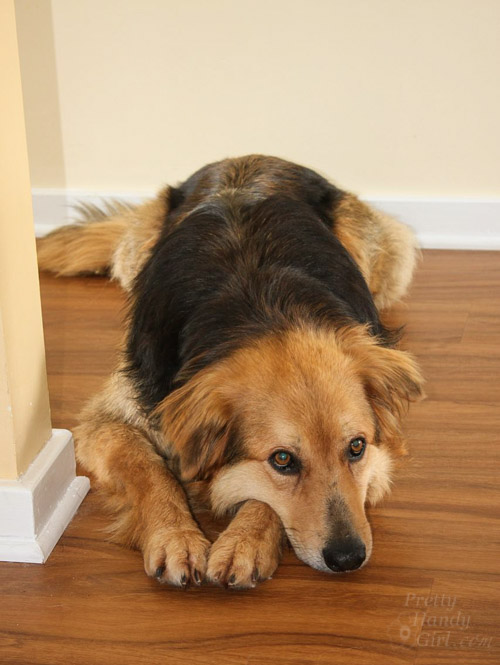 Today I’m going to get a little personal. If you are here strictly for the DIY tutorials, you might want to come back another day.

Those of you that have been following my blog for a while (6 years or longer) may remember when we adopted Buddy aka Handy Dog. Buddy was an amazing dog and was truly my best friend. Buddy’s foster mom told me that she thought he was a Walmart greeter in a past life. I don’t know about that, but I do know that he never met a stranger.

In fact, he had the ability to coax even the most anti-dog person into petting him. Sadly, Buddy passed away in early April. He was diagnosed with a tumor on his heart. Luckily we had four wonderful weeks to spoil him before it was time to say goodbye. I thought I could wait longer for another dog, but Buddy left a huge hole in my heart and only another dog could help heal my broken heart. I began looking for a new dog on PetFinder.com (a huge database of pets that need homes.) I searched for English Shepherds that would be a good fit for our family. I had high standards, so finding the perfect dog was proving challenging. He or she had to be mellow, friendly with other dogs, good with children, not too anxious or skittish, 3-5 years of age, around 50 lbs., and didn’t chase cats.

A few dogs caught my eye on the Petfinder search, but ultimately they didn’t quite fit my criteria. Then two weeks ago, this sweet face caught my eye: 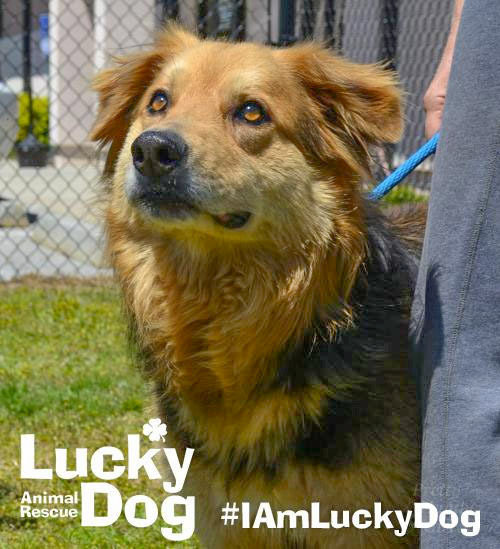 There wasn’t much information about her except that she was a gentle teddy bear of a dog. I filled out an adoption application with Lucky Dog Animal Rescue to allow me to get more information. Lucky Dog Animal Rescue is based in the Washington, DC metro area. The organization works with several high kill shelters on the east coast including ones in North Carolina, South Carolina and West Virginia. They also work with a shelter in Puerto Rico. Lucky Do only rescues dogs that they have spots for in foster homes. The foster parents bring the animals to adoption events every weekend in the hopes of placing the animals in loving homes. Remarkably, Lucky Dog finds home for approximately 1/4 of their foster animals every week!

Soon I received a phone call from Megan, Lena’s foster mom. We talked on the phone for an hour as she told me a lot of pertinent information about Lena. Lena was heart worm positive but she was undergoing treatment. (Did you know that dogs with heart worm have to be given arsenic?) She weighed 70 lbs, but was definitely underweight. (I could not believe this as she looked smaller in her pictures.) She told me that Lena was surrendered by her owner to a high kill shelter in South Carolina (no reason was recorded as to why she was surrendered.) She went on to tell me that Lena is very mellow and a sweet dog. She got along with the foster mom’s dogs. But, what she said next left me speechless. 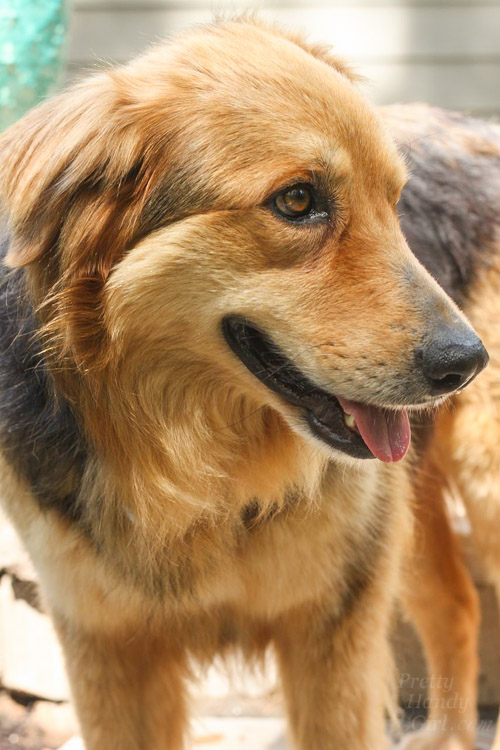 “Lena likes DIYing”, she said. I asked her to clarify and she explained that while working on some DIY projects she turned on the power sander. Her dogs scattered the moment the sander started up. But, Lena stood her ground and watched as if supervising the project. The same happened when she used a power stapler. Lena sat and watched. I was trying very hard not to let the excitement show in my voice. But, my brain was screaming, “Adopt her now! This is the dog for you.”

Megan explained that Lena hadn’t been tested with children yet and she would be taking her to an adoption event in Arlington, VA over the weekend. I knew I’d be going to Virginia in two weeks, but Megan couldn’t hold a dog per Lucky Dog Animal Rescue’s policy. I had three options. 1) I could jump in the car and go meet Lena that weekend. 2) I could wait for two weeks and hope that she was still available for adoption. 3) I could adopt her sight unseen. Luckily, I came up with a fourth option. 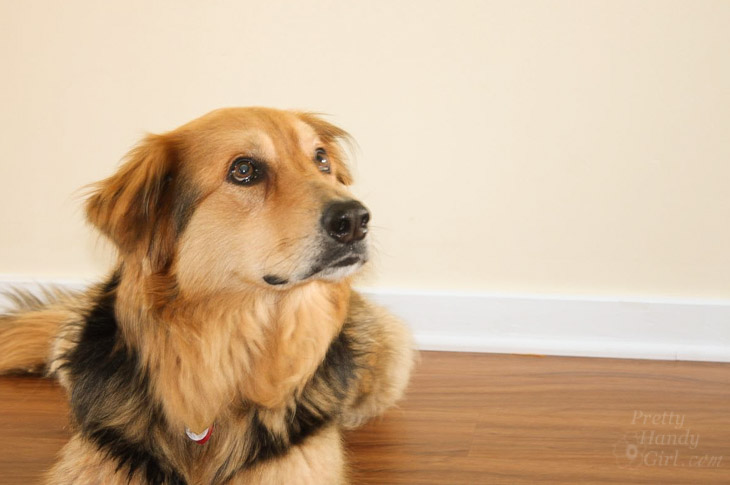 My mom answered the phone on the second ring. “Mom, I’m going to ask you a huge favor. If you say yes, you can count this as my birthday present from you this year.” My mom hesitantly agreed to go to Arlington that weekend and meet Lena. I could barely contain myself as I waited for her to call me on Saturday. When she called she began by telling me Lena seemed very aloof and looked sick to her. Megan had warned me that Lena was not feeling great because of the heart worm treatment. My mom also said that there were children who were petting her and she was very calm. She said a man got up close to her face, and again Lena was calm. Finally, my mom said, “She’s a very sweet dog, Brit. But, there is another woman who seems to be very interested in Lena.” I was so anxious to have this dog, I hung up and called Megan right away. Although it was unusual, Lucky Dog Animal Rescue agreed to let me adopt Lena without meeting her. And Megan agreed to dog sit Lena until I could pick her up in 10 days.

As the hours drew closer to the day I’d meet Lena, I began to feel a pit forming in my stomach. I worried whether I’d like Lena and if she would fit into our family. Megan sent me a few photos via text of Lena. Each time I saw her adorable face, I knew I had to have her in my life. She was beautiful and I was in love with her. Is it bizarre to fall in love with a dog you’ve never met? 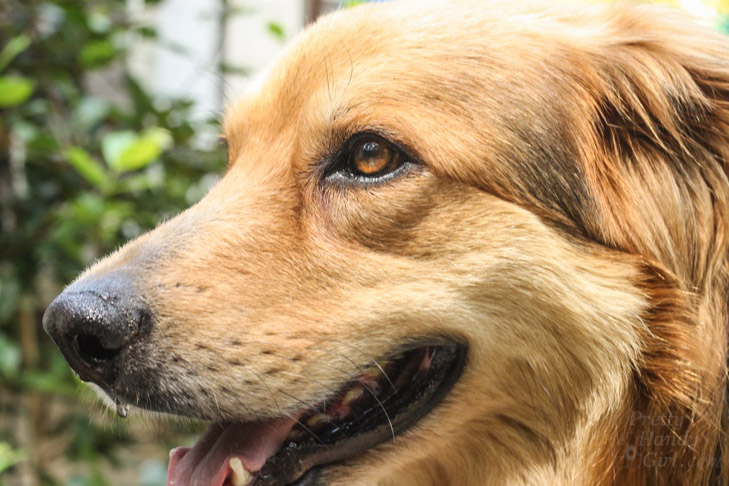 I knocked on Megan’s door and she waved me in while holding back all the dogs. Each one rushed to meet me at the door except Lena. She hugged tight against Megan’s leg. 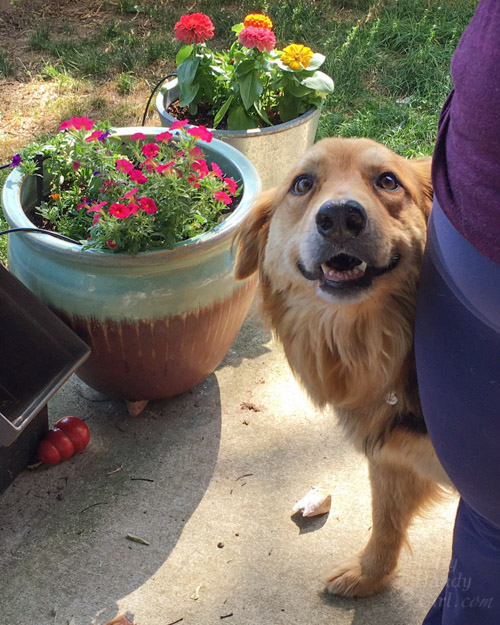 She let me pet her, but her eyes never strayed from her foster Mom. I found myself feeling guilty for wanting to take her away. Megan assured me that she had easily attached to her first foster parent and that she had only been with Megan for two weeks. Everything seemed to live up to what Megan had told me. She really was a big dog at 70 pounds, but her ribs were sticking out. Lena was very sweet and definitely mellow. I promised to return in a few days after my commitment to attend the DeWalt event in Baltimore. Before I left, I gave Megan my pillowcase with a t-shirt in it so Lena could get used to my scent.

As the DeWalt event finished up, I left a few hours early to pick up Lena before rush hour traffic. I arrived at Megan’s and she took about 15 minutes to give me Lena’s medical files and helped me fit her new martingale collar. Then Megan walked Lena to my van and persuaded her to get in. She gave Lena a few send off words and said goodbye to me. As I sat in the driver seat and checked the traffic in Google Maps Lena began to pace in the van. Then she gave one loud bark of protest. I told her not to bark and that was the last peep out of her. It was a long drive back to North Carolina. After a while she laid down and began to relax. Eventually she dozed off for a little while. 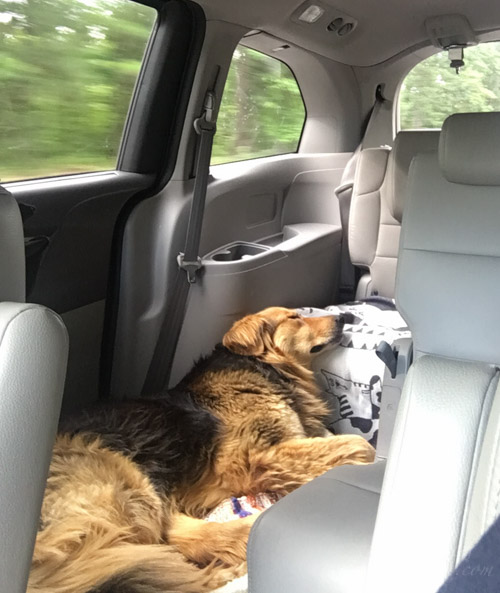 When we walked into the house my son smiled big. It was clear that he was happy to have a dog again and he appreciated her calm nature. The next morning Lena met my vet who jokingly said she wished Lena would be more still during her exam. We both laughed because she held impossibly still as the vet poked and prodded her. The vet and I debated Lena’s breed makeup. She is definitely a mixed breed. Perhaps she’s a golden retriever and a german shepherd. I think I’ll just call her a golden shepherd. (Could this be a new designer breed? LOL.)

After the vet appointment I gave her a much needed bath and grooming. She definitely looks like a well loved dog now. 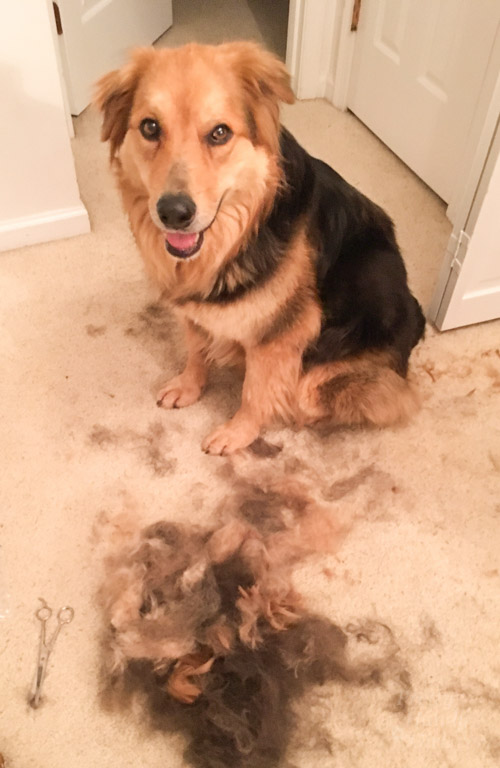 Lena is a chill dog. She rarely barks, we’ve only heard her bark a few times (and it is always just one bark.) She doesn’t know many commands, but she knows her name and, “Let’s Go!” Unfortunately we also found out that she has some thunderstorm phobia. I bought a Thunder Shirt with the hope that it will help calm her in a storm situation. I’ll know more as the fireworks start to go off for the Fourth of July.

One of the coolest things about Lena is her tail. It is a beautiful tail that curls at the tip. As she walks and wags, her tail curls to the left side. 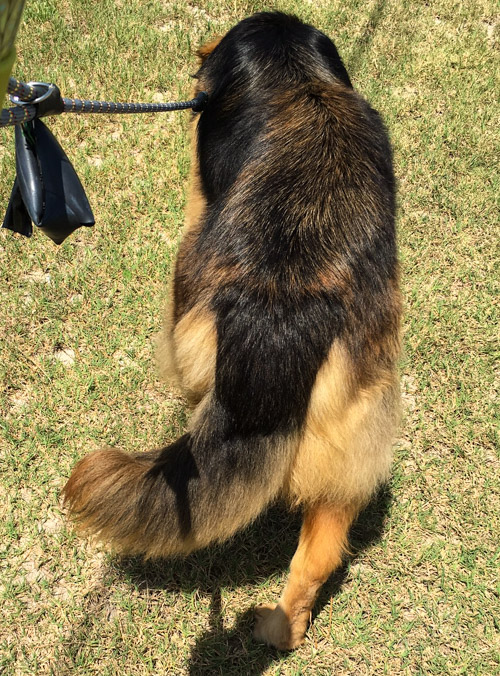 I have to admit, I feel like the lucky one in this relationship. I’m glad to have been able to adopt Lena. 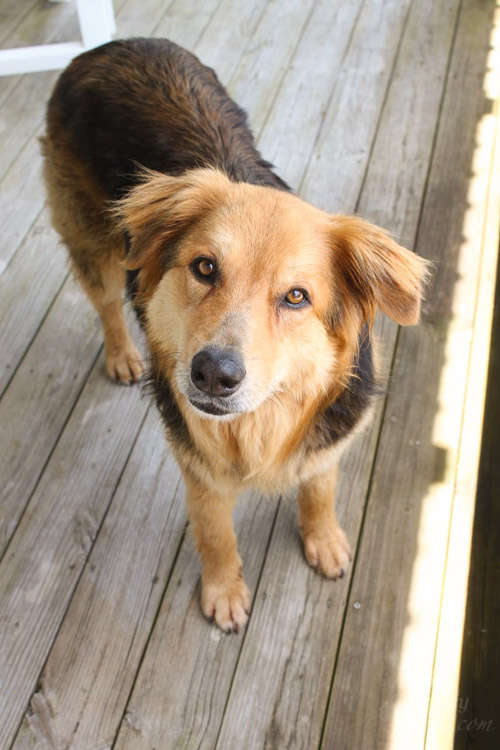 I’m anxious to see how her personality unfolds as she becomes more comfortable with us and as she recovers from her heart worm treatment. 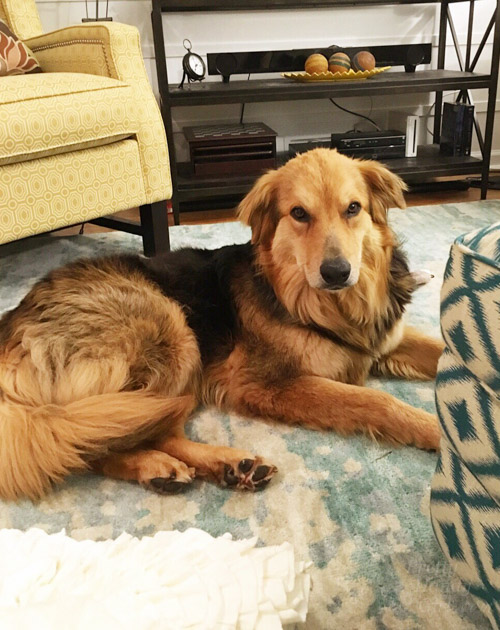 In the meantime, we’re enjoying having her around. 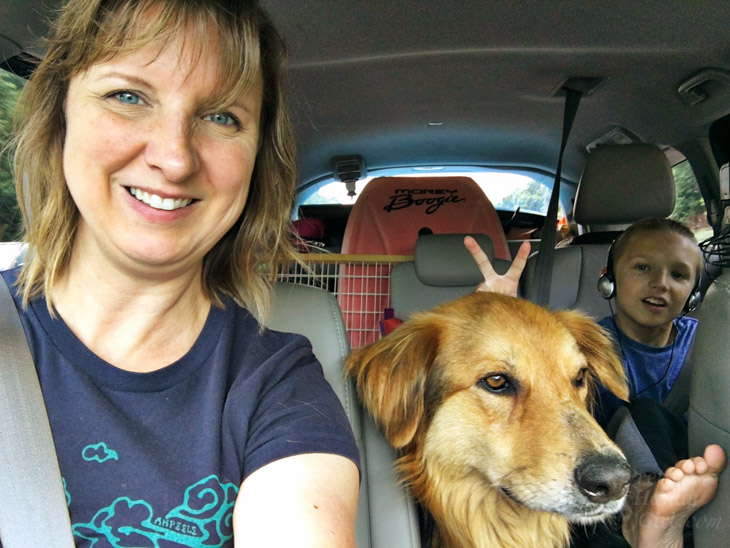 Do you have a rescue dog? Was it love at first sight? And who rescued who? 😉