I’ve been working for the past few months on a friend’s home here in the beautiful capital city of North Carolina. Her home had a great floor plan, but needed some TLC and some updating. Luckily she and her husband had just finished renovating the master bedroom. They were about to gut the kids’ bathroom and give it a similar renovation when I stopped her. She was in disbelief when I told her I could renovate that bathroom for a fraction of the cost of a full renovation. And, buyers would hardly be able to tell the difference. 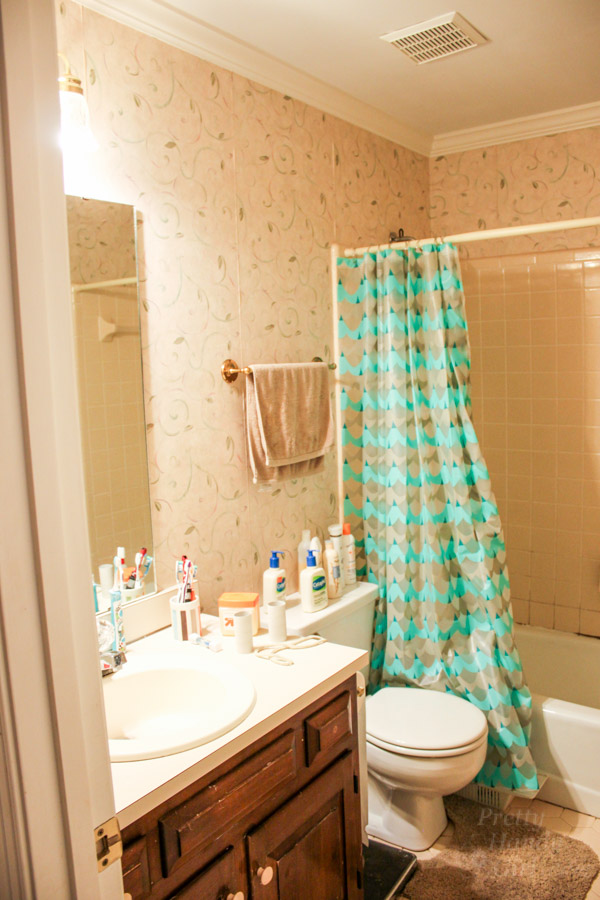 This is a small bathroom, but fully functional and the tile was actually in good shape. 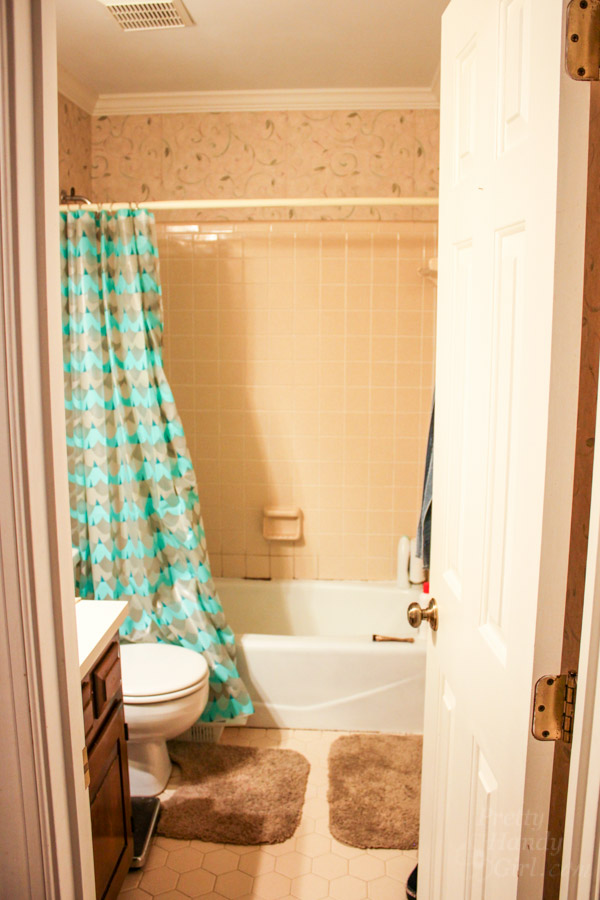 Do you doubt my claims? Ready to see the after photos? 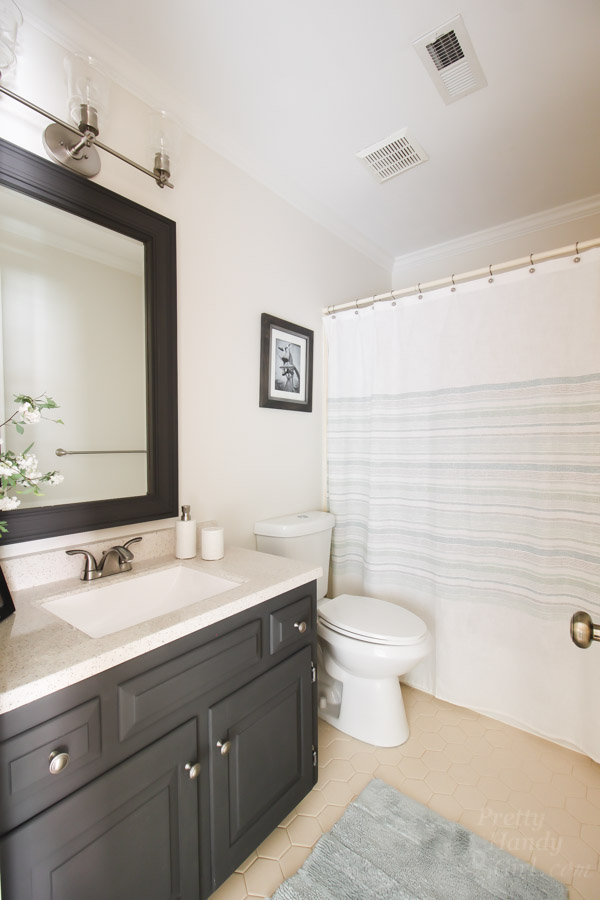 I swear to you, it’s the same bathroom! The number one task was to strip the wallpaper. The homeowner did most of this task herself. Unfortunately that wallpaper had quite a grip on the walls. A lot of the sheetrock was ripped, so we had the painters add a skim coat before painting the walls Sherwin Williams Aesthetic White. 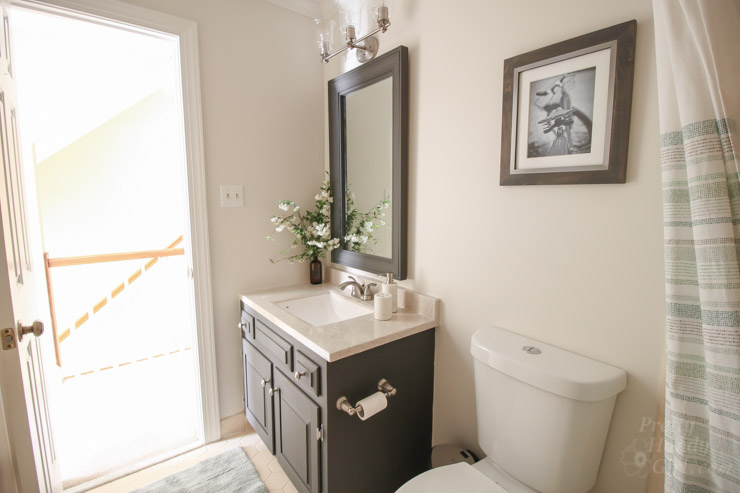 The new paint toned down the focus on the cream floor and tub tiles.

Speaking of tiles, the homeowner really thought we should rip out the tiles because the caulk and grout was in bad shape. The old tub caulk was removed and replaced to look clean and new. Some of the deteriorating grout was scraped out and new grout was spread in those spots. You can learn how to remove and replace your own caulk here and how to apply tile grout here. 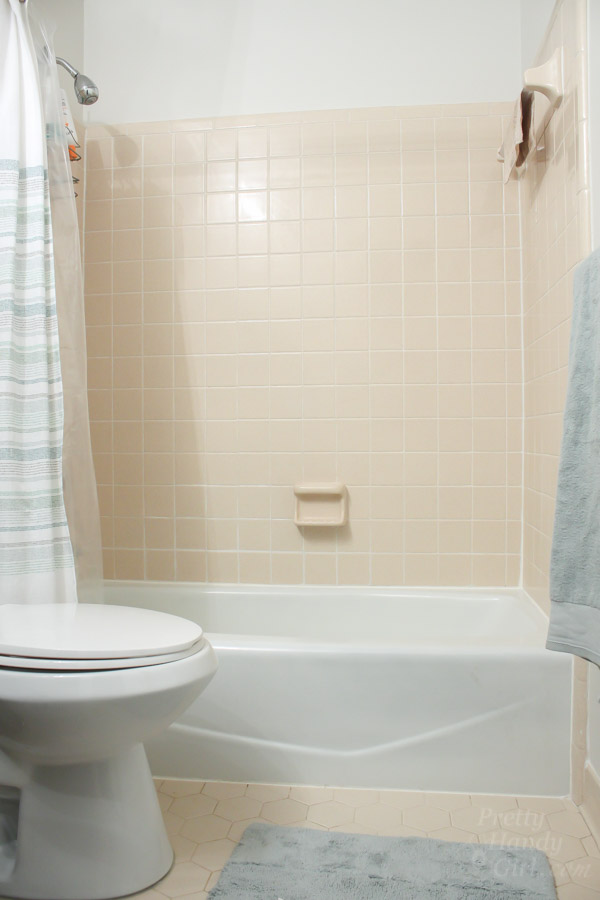 The old builder grade mirror was removed and replaced with a $10 mirror I found at my local Habitat ReStore. 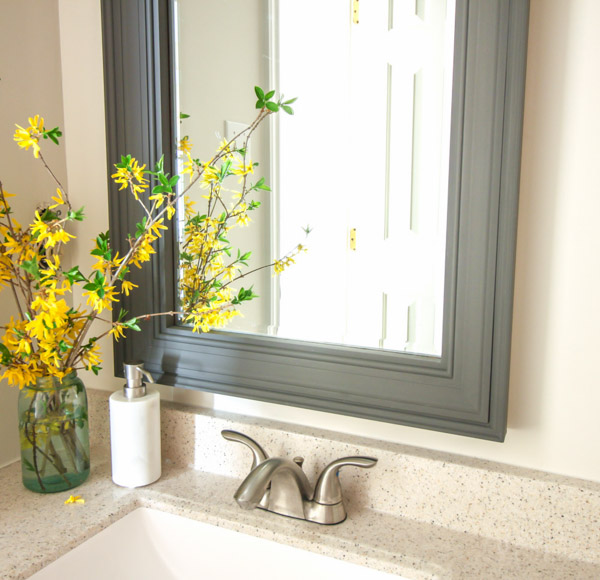 You can read how I updated that ugly dated mirror. I saved lots of money on the mirror and yet it looks like it was an expensive mirror. 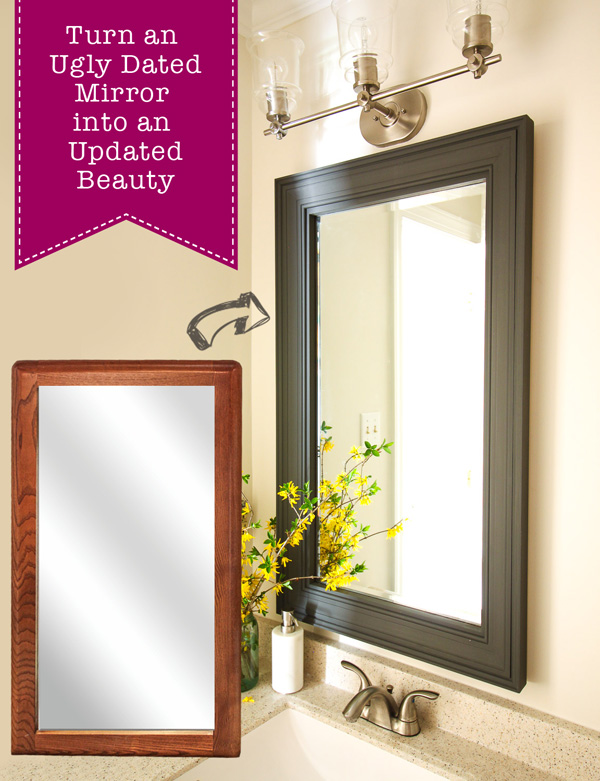 The light fixture was replaced with this beautiful 3 light glass fixture from Lowe’s. Did you know that most bathroom light fixtures can point up or down? Try installing them up facing for a more even light throughout the bathroom. 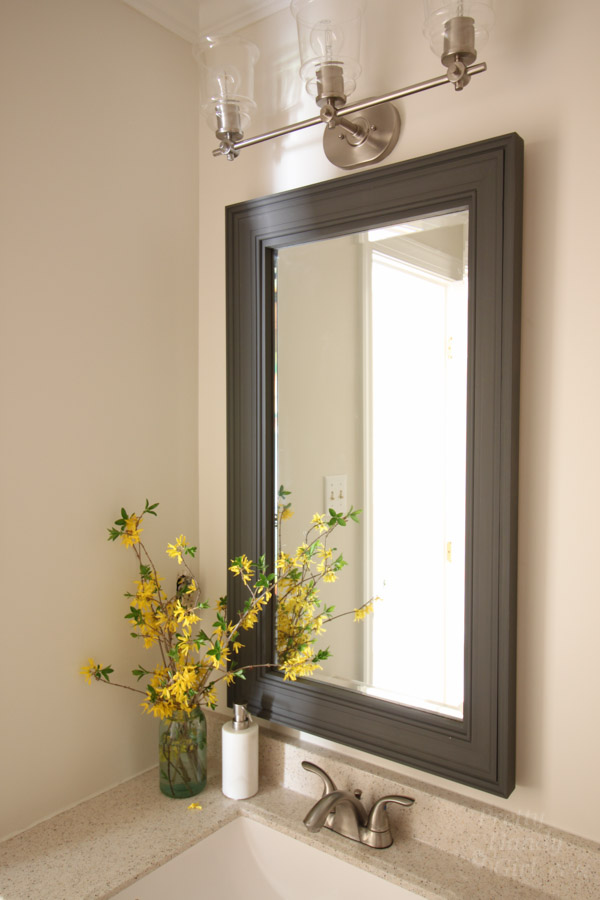 The countertop was one of the only things that we couldn’t save. The homeowner bought this integrated sink and countertop from Lowe’s. I love the square sink and faux quartz look. The homeowner had already purchased a builder pack of faucet, towel and TP bars for both bathrooms. 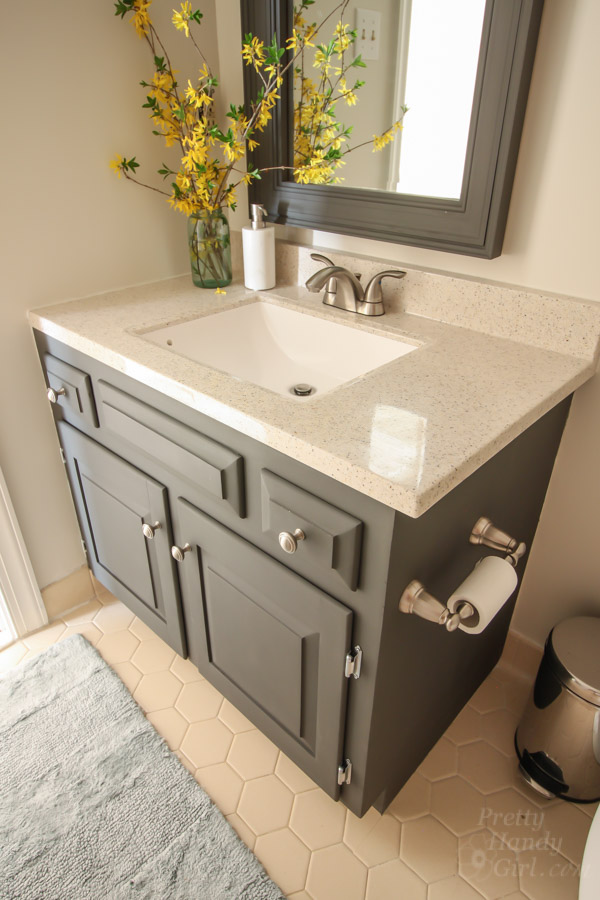 The vanity? Same one! I prepped and painted the vanity to make it look new again. The homeowner was able to purchase a pack of brushed nickel knobs and hinges to complete the illusion that it was a new vanity. 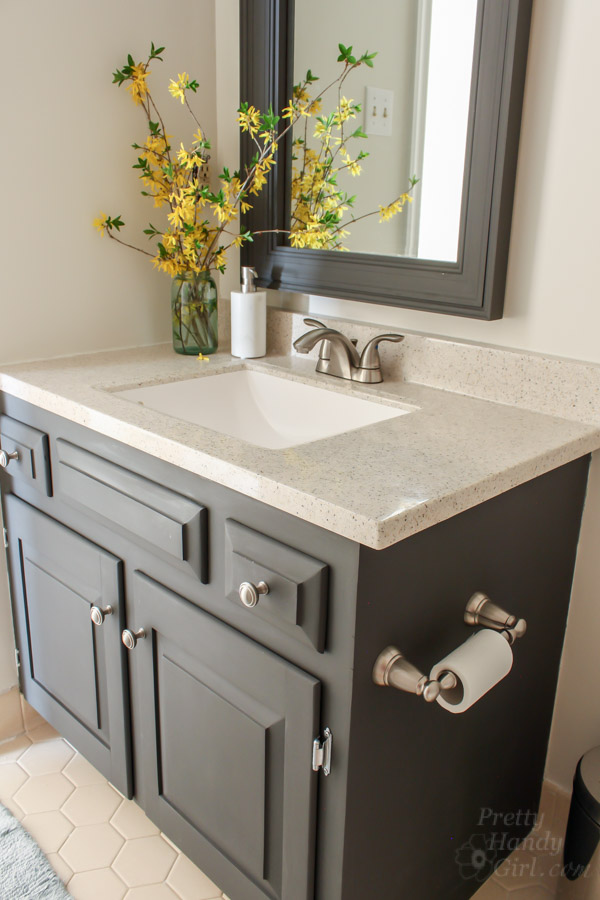 What do you think? Not bad for a few hundred dollars. One more look at the before and after: 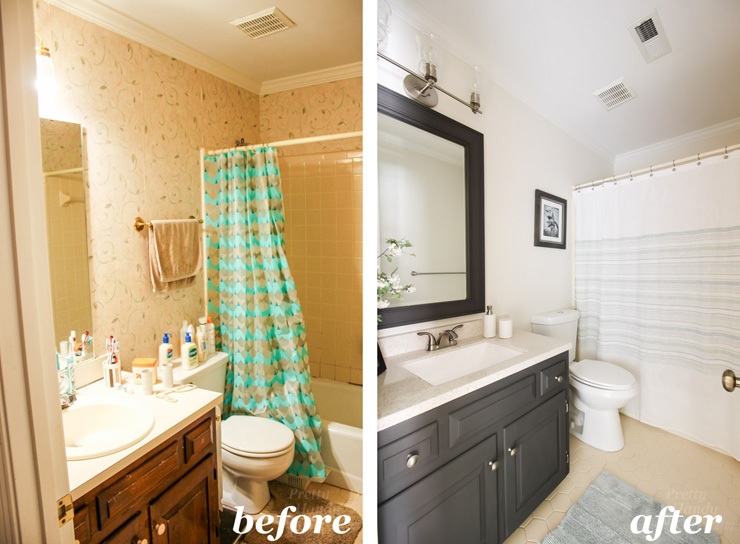 The shower curtain, bath rug and soap dispenser are from Target.

I have a funny story about that bath rug. The homeowner’s young son came downstairs exclaiming “I love the Nate Berkus!” The homeowner had no idea what he was talking about until her son pointed out the tag on the rug. We will forever call that rug Nate Berkus now. Our recent conversation while photographing the bathroom: Me, “Where’s Nate Berkus?” Homeowner, “Oh he’s in the wash again. You know, boys and their aim.” LOL, oh I know, I know. Poor Nate Berkus. As a side note to all you boy moms, Nate Berkus washes really well! 😉