This past weekend when my family took a much-needed vacation to the beach, I got to tour a hurricane-damaged abandoned beach cottage and I want to take you along! 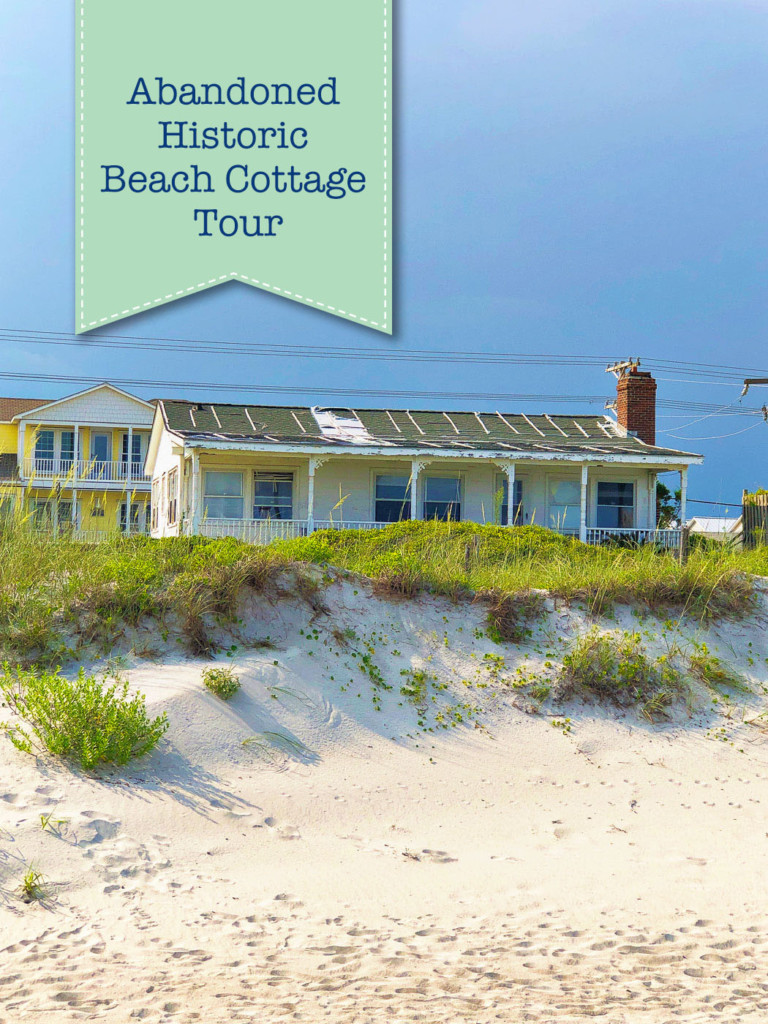 Little did I know, I had been charmed by this little white cottage peeking coyishly above the dunes. Years ago during the offseason at Topsail Beach, I found myself standing on tippy toes trying to see a quaint little white house with a front porch spreading across the front like a welcoming smile. I climbed the beach access steps to get a better look. A few steps up the stairs and I marveled at the matching sets of corbels adorning the tops of each porch post. 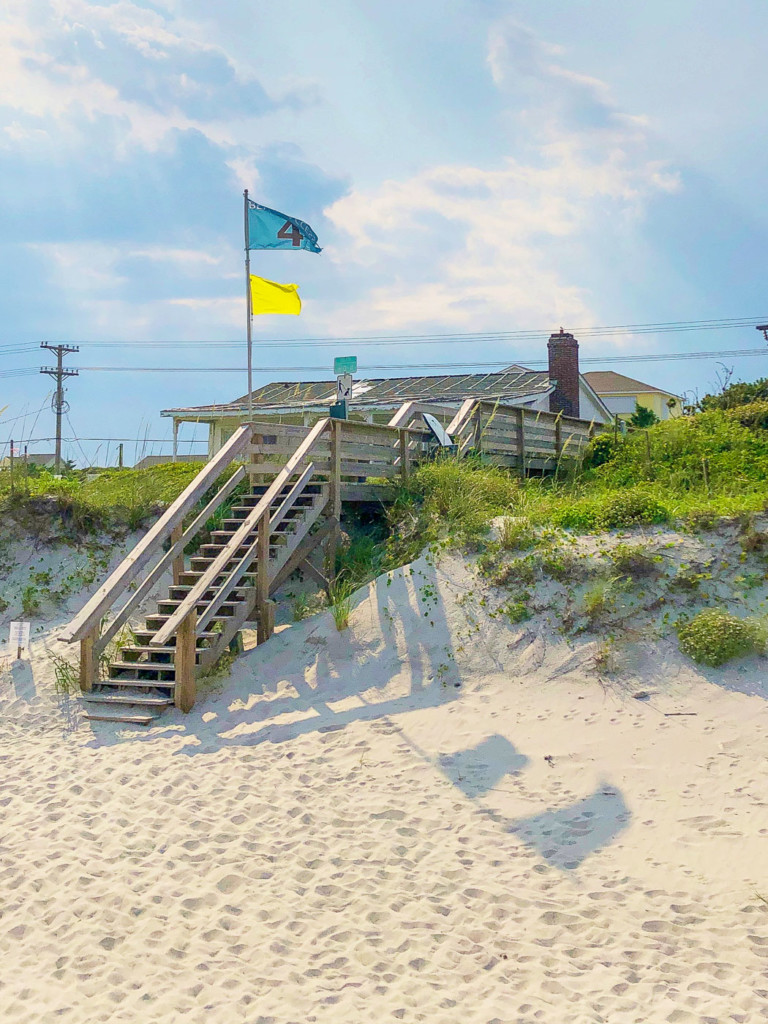 Not wanting to look like a peeking Tom, I continued along the boardwalk, but stopped as I noticed the house was empty. I admired her architecture and noticed she had more adornment than the usual beach cottages lined along the coast. What caught my interest next was the small 2-foot white cinderblock wall surrounding the property and a vacant lot next door. The wall was hidden in areas by cascading vines and wild beach brush. I briefly wondered if a twin house once stood next door, but succumbed to one of North Carolina’s destructive hurricanes. 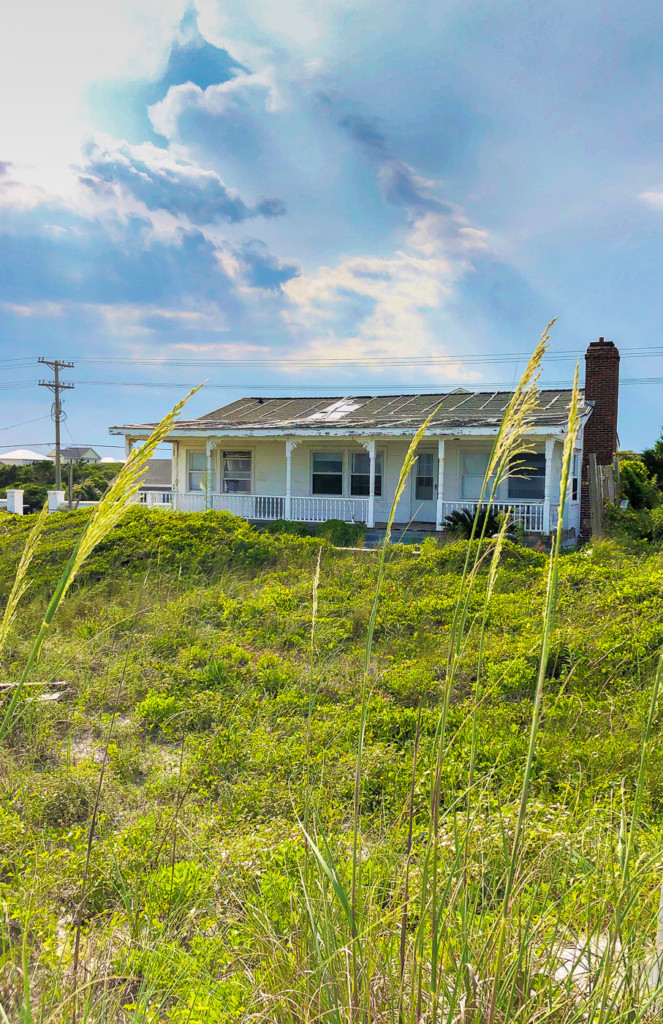 My gaze moved back to the cottage and I tried to mentally capture every detail in my mind. These little beach houses had always pulled at my heartstrings. My goal (or rather dream) has been to renovate one over a summer. But, to date, the right house hasn’t materialized.

Fast forward to this past weekend when my family took a much-needed vacation during a very stressful time. The ocean has been the exact prescription I needed for my nerves during these trying times. While here, I happened to stumble onto a real estate listing for a cute white beach cottage. The price was low enough that it piqued my interest. Before calling a realtor, I researched as much as I could about the house. I took a walk down the road to get a peek at the house and determine if I wanted to pursue setting up an appointment to see the property. Afterall, the price was low, there must be some major damage or some reason it wasn’t listed closer to a million dollars (the normal cost for beachfront property).

From the back, the cottage looked fairly nondescript: A painted white concrete foundation supporting a white siding-clad second story. The only features it had were two striped awnings over the lower windows. Centered on the second-floor were letters that spelled out: The “Happy” Lewis Cottage. Fittingly, the “Y” in happy had fallen off. 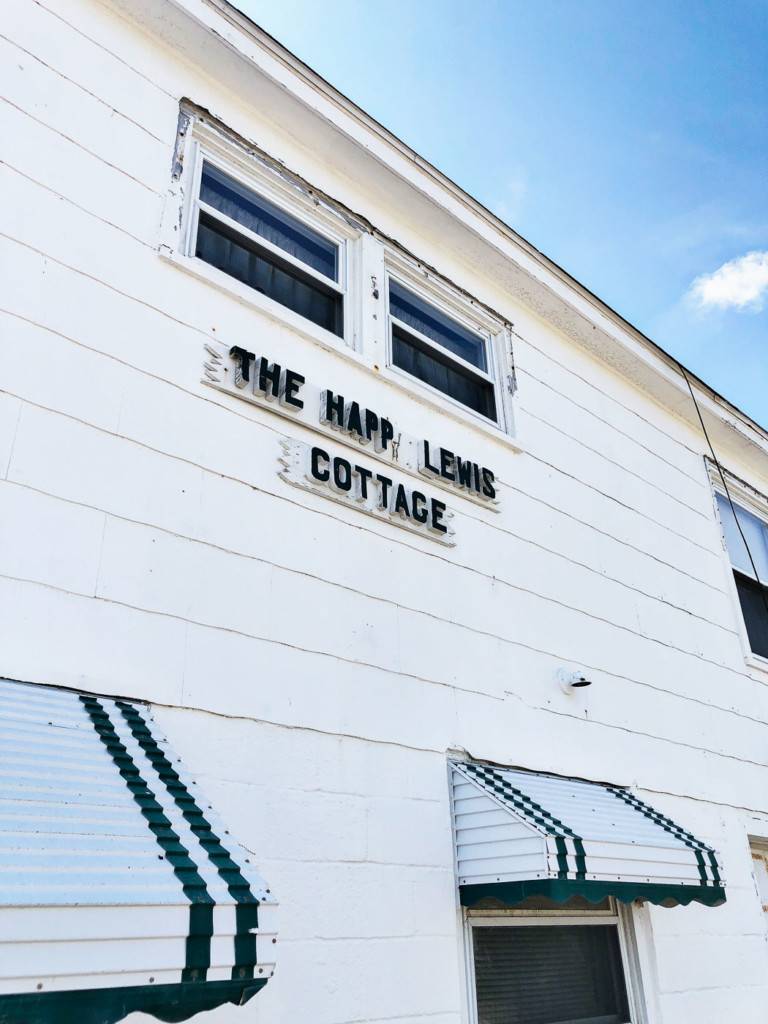 I strolled around the foundation perimeter looking for any signs of damage but couldn’t see a single crack. The house was built into the dune with a huge retaining wall holding the sand back for an empty lot next door. Suddenly, a memory appeared, and I recalled the small wall around a vacant lot. 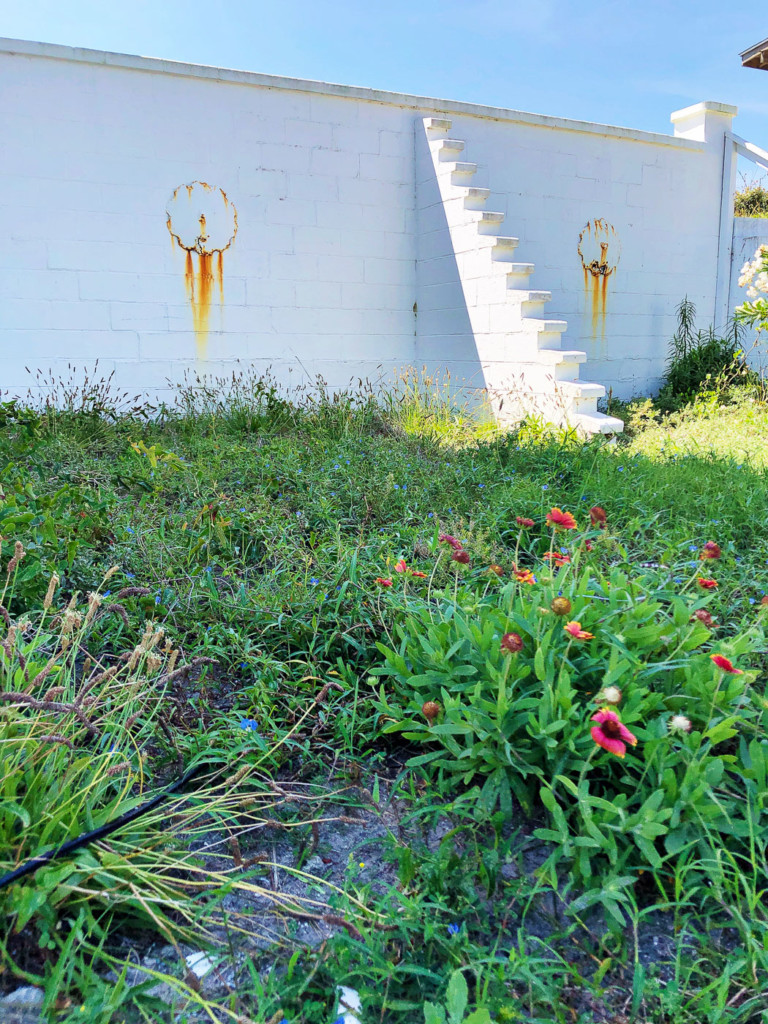 Quickly I moved up the beach access stairs and there was the little corbel decorated porch I saw two years prior. 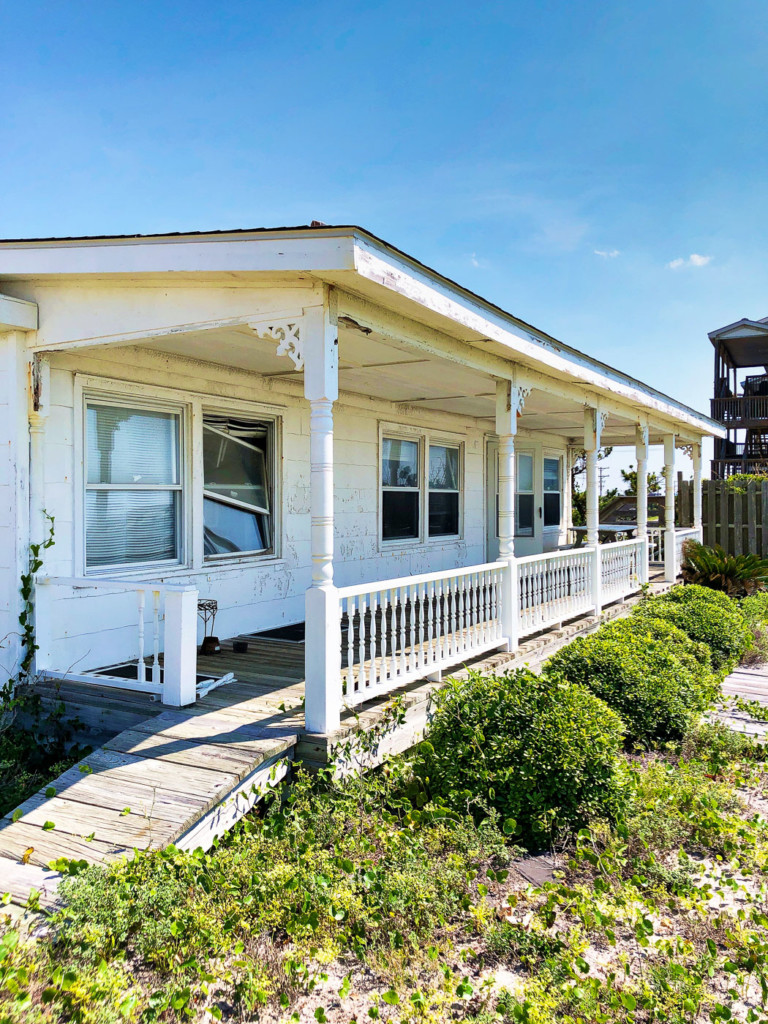 I ran back to our condo and began researching the house.  The “Happy” Lewis Cottage was named after the original owner, Harry “Happy” Lewis. Apparently Mr. Lewis was a trend-setter as this house was the first oceanside house built south of Surf City. I remembered reading in the MLS listing that the home had suffered some hurricane damage in 2018 from Hurricane Florence. Those of us who live on the east coast will never forget the hurricane that wouldn’t go away. Florence was a category 4 hurricane that pounded our coast with 130 mile per hour winds and rain.  The damage up and down the coast was extensive and many homes still need repairs. Hurricane Florence was so powerful, it made its way 15o miles inland to dump massive amounts of rain, wind gusts, and some tornados on us in the Raleigh/Durham area. 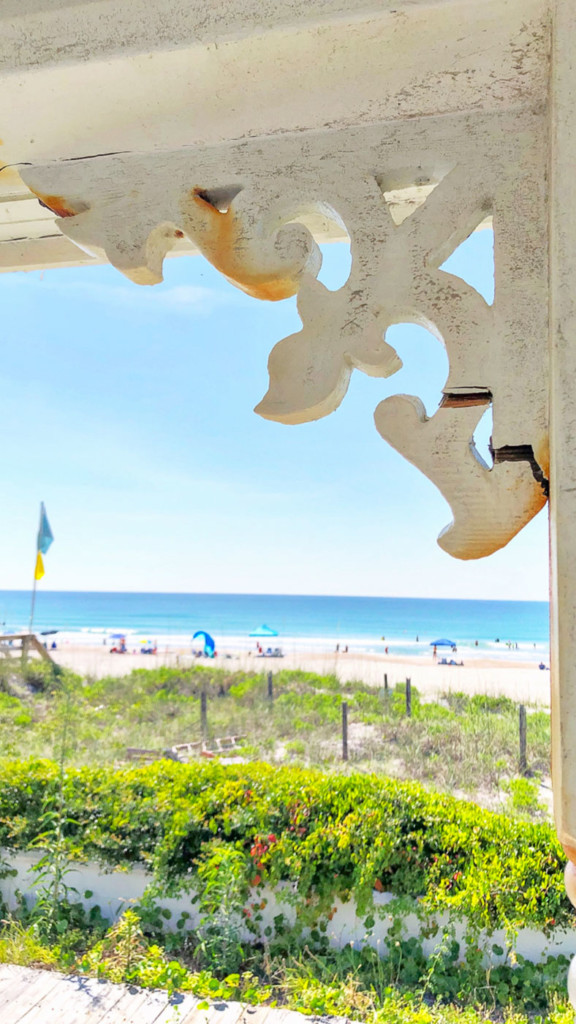 By the look of the roof, I knew there was likely some water damage and mold inside the cottage. This would explain the lack of interior pictures on the MLS listing. By now I was hopefully optimistic that this house could be saved. I contacted a local realtor who offered to let me see the house in a few days.

Bad News on the Showing Day

When I met the realtor at the house, he told me the listing agent wouldn’t give us access to the house. She was concerned for our safety because of the mold in the house. I begged my realtor to call her back. Luckily, he convinced her to let us in when he explained I was a general contractor and was used to severely damaged houses (you all remember Saving Etta, right?!)

Before I stepped into the house, the realtor told me the house was going to be demolished in two weeks. I thought to myself, “Wait, I bet I can save this house! Let’s see how bad the inside is.” His next words were like a bomb dropping, “The septic tank is buried on the vacant lot next door.” The lot next door was on the market separately for $480,000. 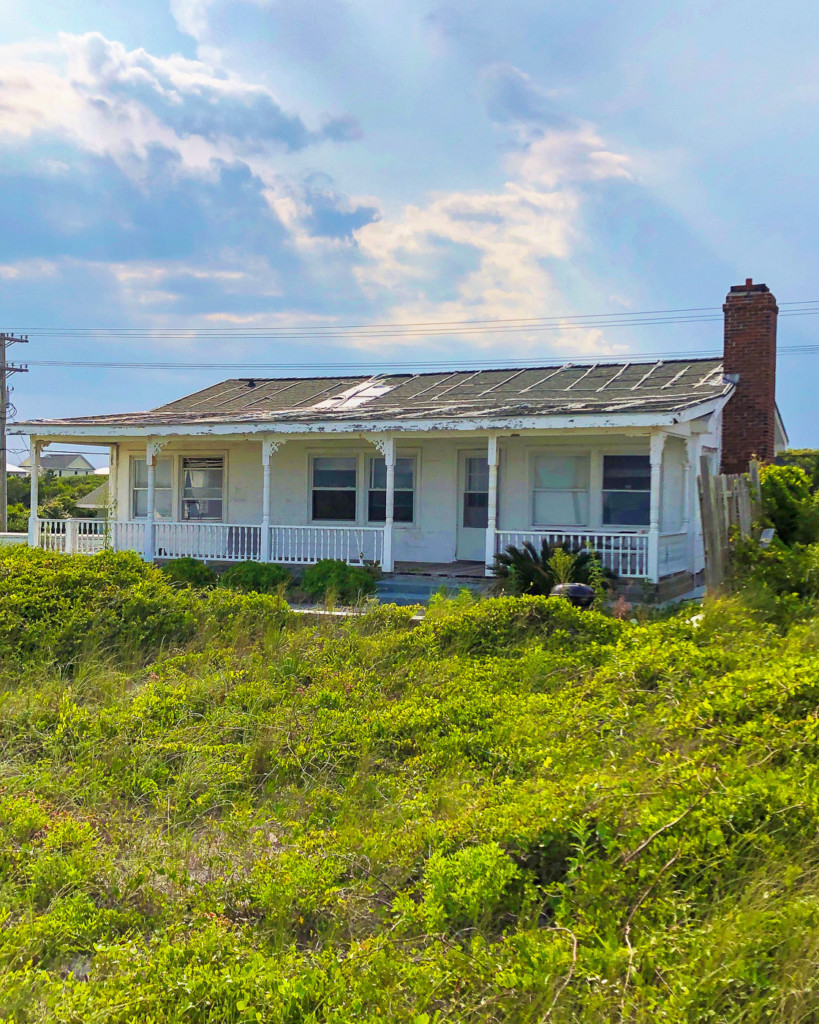 “Wait, what?!” I exclaimed. Apparently, when the property was built in 1949, the owner had purchased both lots and situated the septic tank on the empty lot. It made sense since there wasn’t enough room to put a septic tank on the house side. Over the years the house has been passed down for generations. But, with the storm damage, the current family owners wanted an exit and decided to sell both lots. Unfortunately, the empty lot needs to be cleared of the septic tank. And the house can’t exist without a septic system. It’s a true conundrum and not one that has a good solution. No one with a savvy investor mind would want to purchase two lots to save one house. After all, even if someone was crazy enough to do this, it only kicks the can down the road. When it’s time to try sell again, you have two lots, one that is unbuildable, and the other has a house with a septic on the wrong side of the property line.

The realtor shook his head as I vocalized this no-win situation. “I know, it’s a shame,” he said, “but, go ahead and take a look around. It’s a sweet little cottage.” 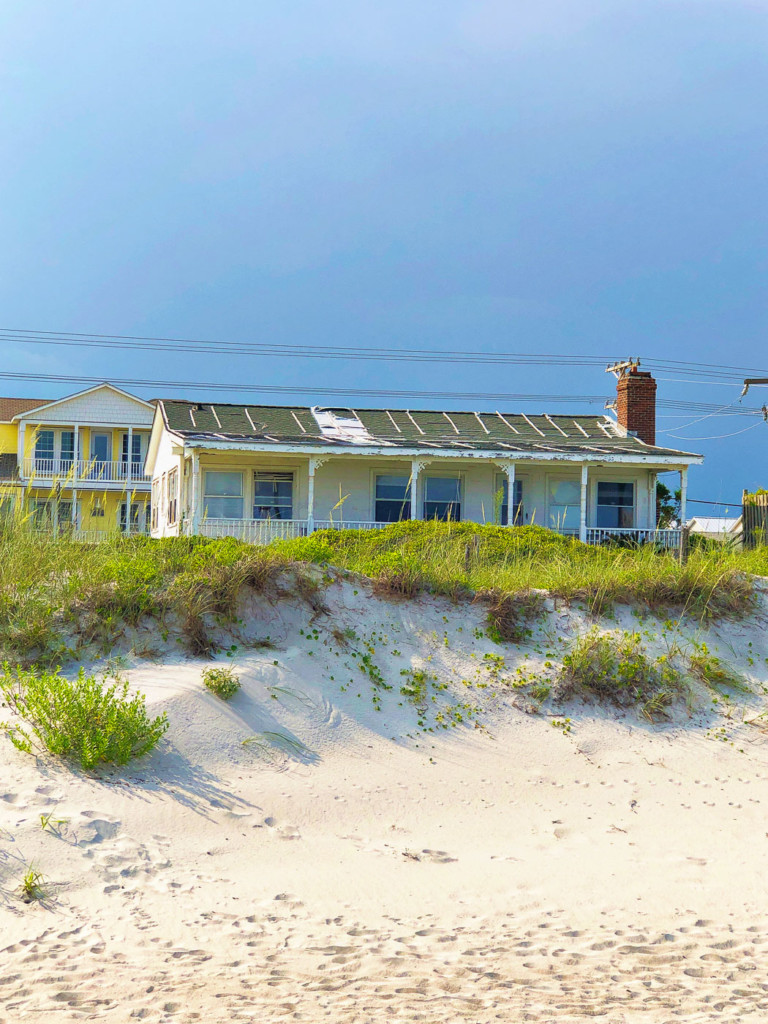 Inside the Abandoned Beach Cottage

As I stepped into the 1949 cottage, I was immediately transported back in time. The exterior door led directly into the kitchen. The cabinets appeared to be original as did the metal rimmed countertops. A large dining table sat next to the kitchen with a table cloth on it, as if waiting for the family to come in at any moment for dinner.

When I looked up at the beautiful pine tongue and groove ceiling, I spotted the telltale signs of mold and wood rot. Amazingly the roof had to have been leaking for a while to cause the old-growth wood to rot.  The rest of the kitchen still looked to be undamaged.

Walking into the living room, I knew this room had been privy to many nights of family laughter and stories. I could tell by the broken in sofas that many hours were spent curled up against the arm reading a book after a long day playing in the ocean. And I feel certain on many occasions they provided a spot for a cat nap. 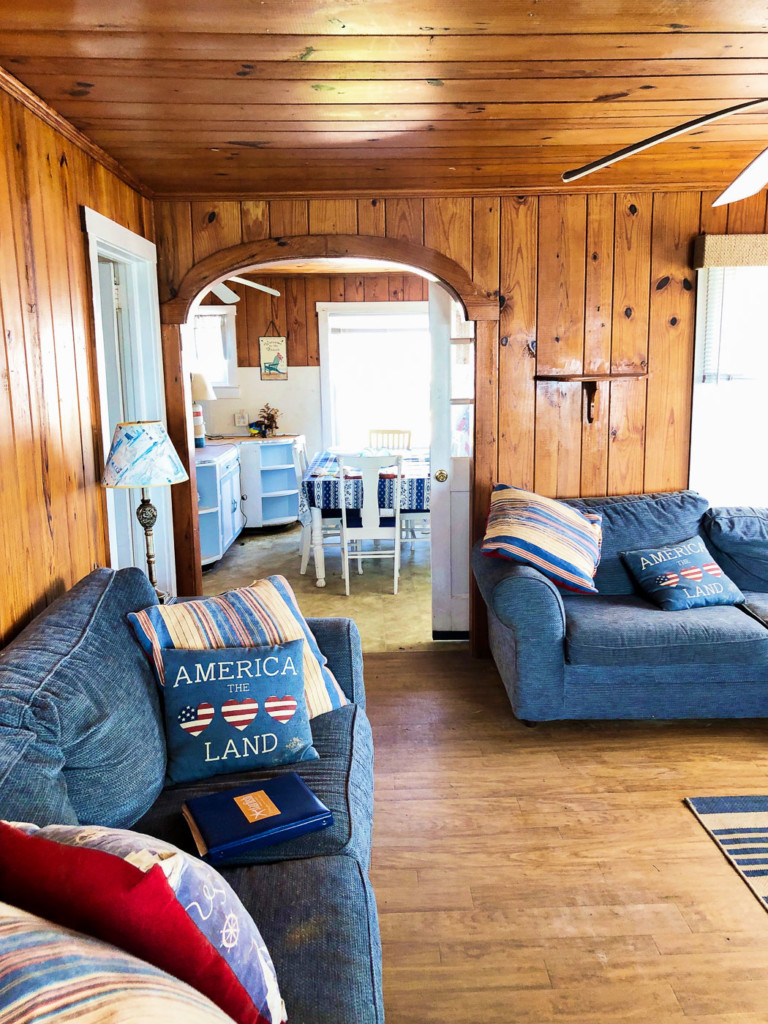 Moving on toward the hallway leading to the bedrooms, I pushed through the half-light door and looked down to see the original pine floors in perfect condition. The tongue and groove walls had been painted a cottage-style white and there were several niches built into the wall lending a charm only an old house can pull off. 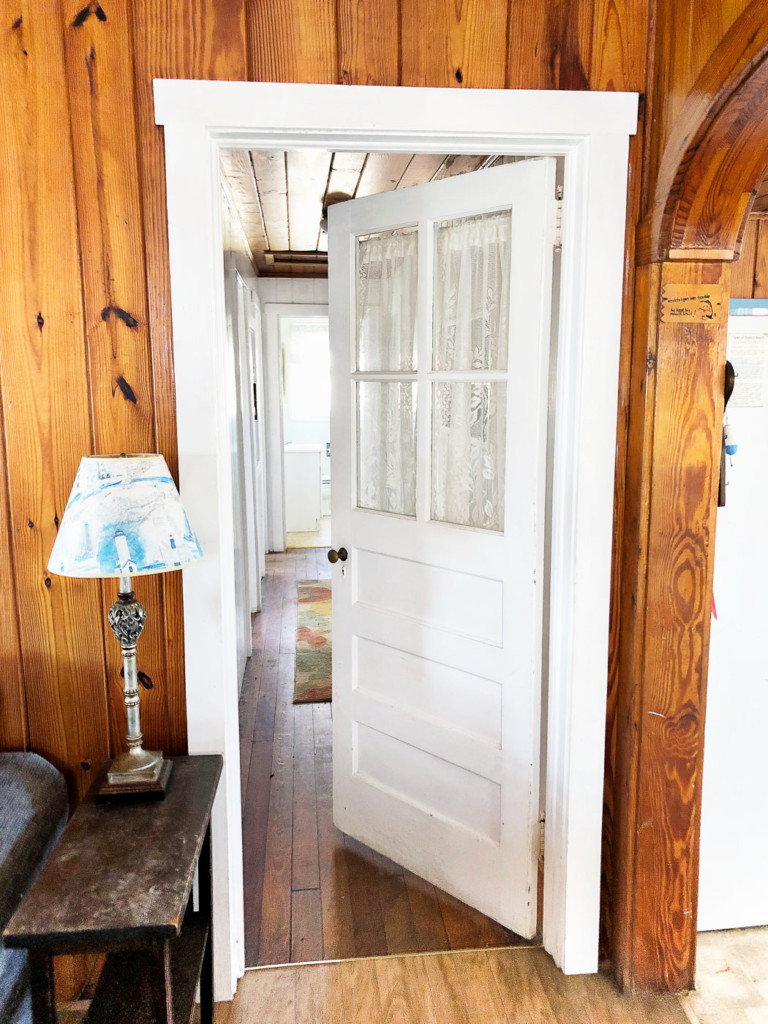 Each bedroom was small with matching tongue and groove panel walls. And each had a perfectly made bed ready for family or guests to sleep in. Again, everything looked to be in great shape, and ready for guests.

When I reached the back bedroom, I saw some telltale hurricane damage. One of the window sashes had been blown in and hung at an odd angle. Remarkably the floors and everything in the room was still intact.

After assessing the condition of the entire house, I mentally tallied the removal of the ceilings to be replaced with drywall, new insulation, and definitely a new roof. The scope of repairs wasn’t too bad but there was the septic issue. I wracked my brain, but couldn’t come up with a solution that made sense financially.

I’d love to bring you inside to take a video tour before this cute cottage is demolished in a week or so. I hope you appreciate the charm of this bungalow.

After seeing the tour, are you as sad as I am about the loss of this little historic cottage?