Last week we were in Orlando, Fl for a little vacation. While there we celebrated Pretty Handsome Guy’s birthday, went to Disney World – but best of all we witnessed a moment in history! 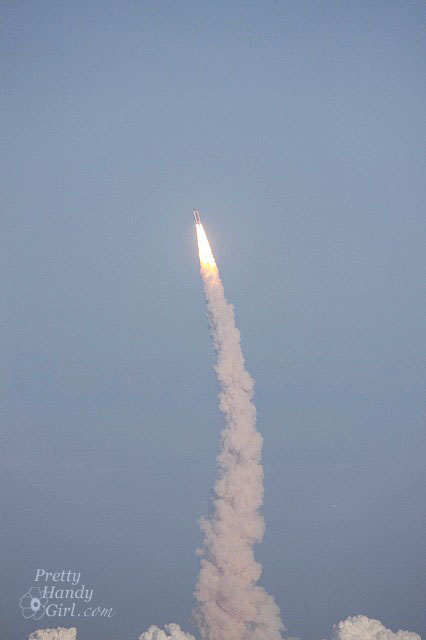 Pretty Handsome Guy had been following tweets from NASA and scouring message boards to plan our trip. He strategized about the best location to view the shuttle launch. So, Thursday began with us eating breakfast and then driving about an hour due east to Titusville, FL. 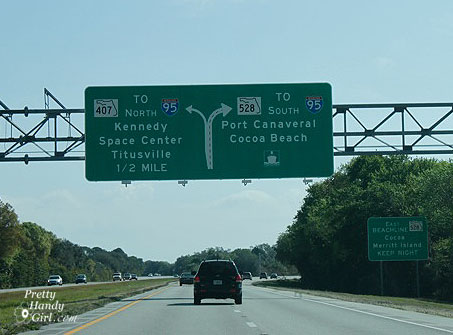 This way to Titusville, FL 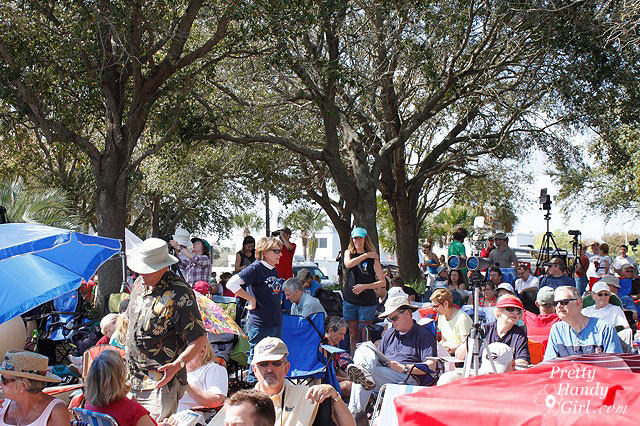 People began staking claim to spots at 6:30 am

We arrived about 9:45am and staked out our small 7′ square spot in the dirt amongst a sea of people, some whom had been there since 6:30am! The shuttle is barely visible as a small tower in the hazy distance. But, the view is unobstructed. 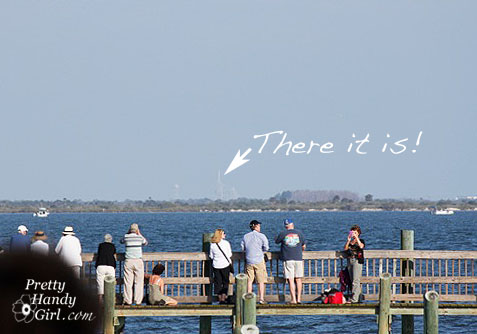 An unobstructed view of the shuttle as it waits on the launch pad.

Frank and John, two grandfathers from New York, graciously let us squeeze in front of them. The next several hours proved a real joy and treat as we talked to them and got to know them better. John told us stories of his days as a fireman. And Frank shared his joys as an active grandfather who watches his grandchild a few days a week.

Throughout the day Pretty Handsome Guy and I took turns rushing our boys to the bathroom (which consisted of long lines for two port-o-potties.) Pretty Handsome Guy also spent a lot of time playing ball, and going on excursions with the boys trying to keep them entertained until the scheduled launch window around 4:45pm. I don’t think I need to tell you that keeping two boys entertained in a 7′ square space for 7 hours was challenging to say the least.

A retired NASA official broad-casted information as they received it over the loudspeaker at the park. And sold pamphlets with information about the launch.

These six astronauts were scheduled to board the Space Shuttle Discovery for its final launch: 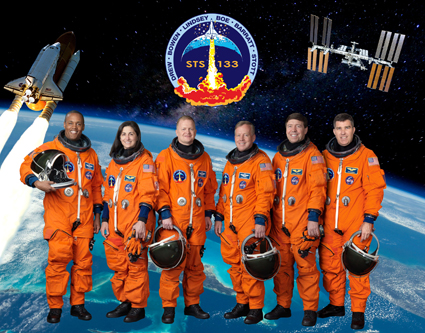 A few factoids about this mission.

This mission has been trying to take off since November. Several incidents have kept it grounded. Plus, two tragedies have befallen two of the crew members. Tim Kopra, was injured in a bicycle accident in January and had to be replaced by Scott Bowen. Commander Mark Kelly, as some of you may know, is Representative Gabrielle Giffords’ husband, and therefore was taken off this mission and is currently scheduled to command the STS-134 launch of Space Shuttle Endeavor.

Here are a few interesting factoids about the Space Shuttle Discovery. It flew 38 missions before this launch, more than any other space shuttle. Discovery assembly began in 1979 and was completed in 1983. Space Shuttle Discovery helped launch the Hubble space telescope. And was also the Shuttle that carried Senator John Glenn on his mission as the oldest astronaut to fly in space.

About 4 hours before the scheduled lauch, a group of “Titusville” Police officers began wandering through the crowds. I  don’t know about you, but I’ve never seen small town police officers toting assault rifles, wearing earpieces and sporting bulletproof vests on the outside of their camo suits. Their presence brought both comfort and fear to me. (I think the fear stems from growing up Quaker and not ever seeing a gun closer than on a policeman’s hip. And certainly NEVER a gun bigger than a pistol!) 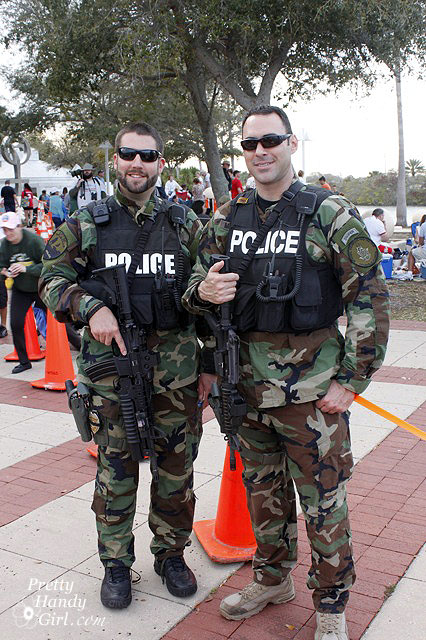 Not the usual small town police officers. At least they were happy!

Photographers set up tripods, ladders and took meter readings. I saw zoom lenses that looked like they belonged to National Geographic commissioned photographers. 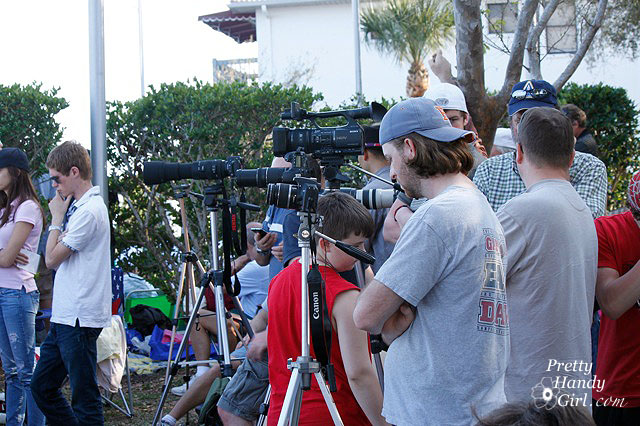 A constant stream of people continued to show up and look for prime locations for viewing. Land space became a premium and soon every square inch of space was occupied around us. The exit ramp across the inlet from us was packed with people. 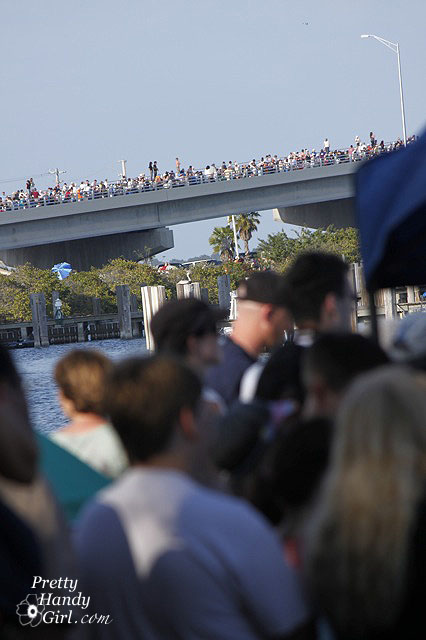 This boy staked out his viewing spot in a tree when there wasn’t a blade of grass left to stand on. 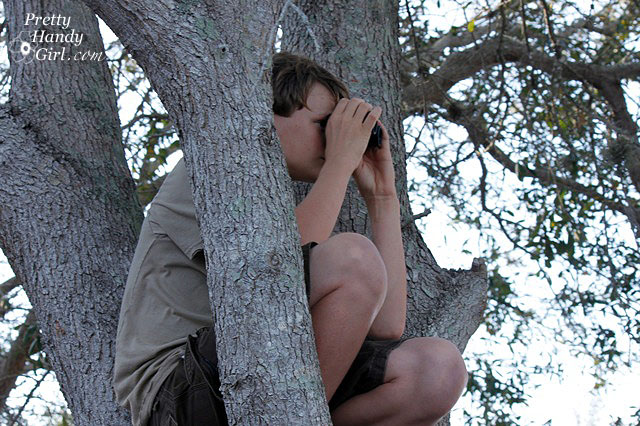 As the hours ticked by, tensions mounted as announcements spread like waves over the crowd. “There is a problem with one of the tiles around the hatch. Technicians are checking on it.” After about 45 minutes of nail biting, the tile was deemed acceptable for launch. PHEW!

If the launch is “scrubbed”, they will either delay it 24 hours for the following day (because there is only a 10 minute window for the shuttle to launch which will allow it to meet the International Space Station. If you want more information as to how this window is calculated, read THIS!) Worst case scenarios would be if a problem occurred that could require the launch to be delayed days, weeks or months. Ugh! Frank & John had been unlucky enough to have sat through such a scenario back in November.  I hoped, prayed, crossed my fingers and toes hoping that we would be able to witness the launch on this day – the day my husband turned 40! (How special!) And that the launch wouldn’t be delayed 24 hours until the next window of opportunity. I don’t know how we would have entertained our boys for another whole day in a 7′ square spot in the crowd.

As the afternoon wore on, the sun slid across the sky. Elation was evident as we got closer and closer to the launch window. Then 30 minutes before the launch we heard over the loud speaker that there was a problem with one of the computers in Houston, TX. “Houston, we have a problem!” We all held our breath. 20 minutes, “Still trying to resolve the computer issue in Houston.” Ten minutes, “Still no word from Houston on the computer issue.” Five minutes, ” Houston is still working on the computer issue.” We were all silent and holding our breath. A few jokes passed about re-booting the computer, un-plugging and re-plugging it in. One minute later, “We received word that everything is a go!” A loud cheer roared through the crowd of over 5,000 people at just our little park!

We rushed to put our kids on the folding chairs so they had the best view and jockeyed for position to see the shuttle take off.

A big plume of white smoke appeared below the space shuttle Discovery, and the countdown began:

Ten…nine…eight…seven…six…five…four…three…two..one…BLAST OFF! A HUGE orange flame visible from 12 miles away across the river where we sat appeared at the base of the shuttle. We watched it slowly (slower than I thought was possible for a rocket propelled object) ascend straight into the sky.

It arched gracefully to the left. I prayed that the shuttle would continue on its predicted course and not repeat the ill-fated Launch of the Challenger, which I watched on TV as a teenager while babysitting two boys about the same age as my sons. (I was at a total loss of how to explain the explosion to them, as I would be today to my own children.)

Then the most amazing thing happened, 1 minute and 15 seconds into the flight, a roar came rushing across the water towards us. It was like a low rumble. The sound had finally traveled the distance across the water to where we stood. It had been rumored that we could feel the ground shake. We didn’t, but my legs were VERY shaky as I realized how important a day in history this was for our nation and for my family.

I alternated between looking up in the sky and taking pictures. I watched as the shiny glint in the sky separated into three objects when the shuttle’s rockets detached. 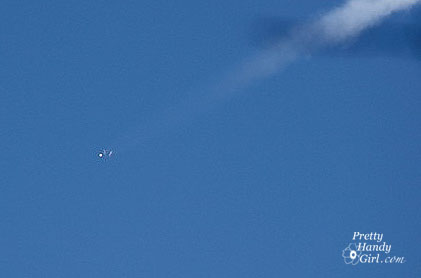 We stood there a long time until the shuttle was a mere speck in the sky. The excitement and elation in the crowd was wonderful. I said a silent farewell to Discovery on its final flight before retirement and wished its crew godspeed and a safe return home to their families.

What was amazing to me is that we had sat for 7 hours with a crowd of people who were all polite and happy to be amidst perfect strangers. We were all there for one reason and we had been rewarded with a sight that our children’s grandchildren may never see. 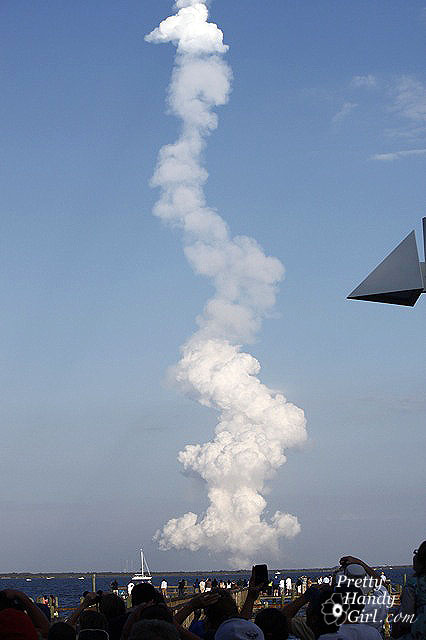 I hope that my nearly 7 year old son remembers this day and tells his children and grandchildren. And hopefully our 4.5 year old will remember enough to have his memory enhanced by his brother’s stories to tell his offspring as well. 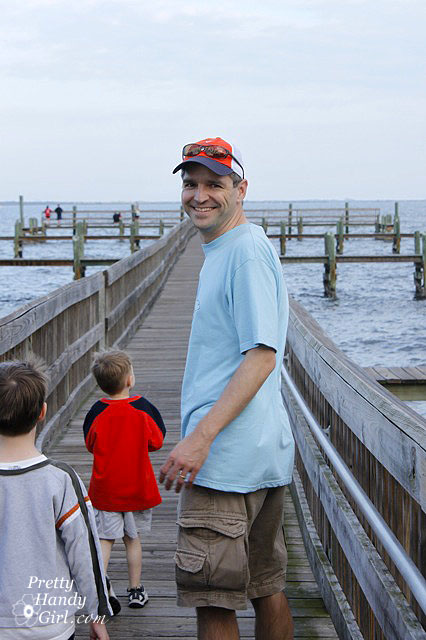 There are two more shuttle launches planned before the Space Shuttle program is finished forever. Should you have any desire to see one of the launches, I urge you to make your plans and head to Florida. More information on the remaining two Shuttle launches (STS-134 and STS 135) can be found HERE.