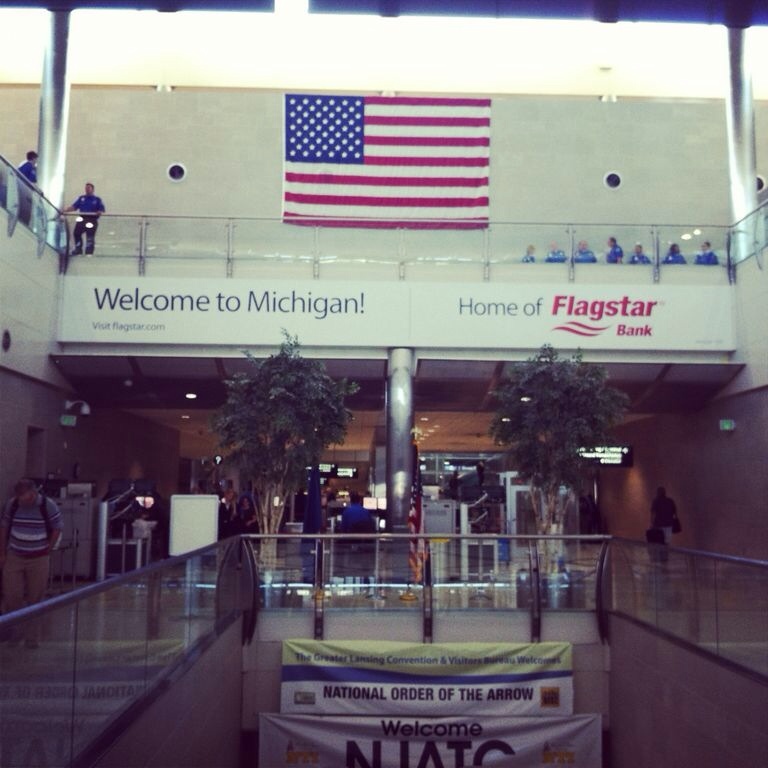 Well, I arrived safely in Detroit and hit the ground running. It is going to be a whirlwind of activity from now until Sunday, August 5th! Are you up for the adventure? If so, I’ll take you along for the ride. 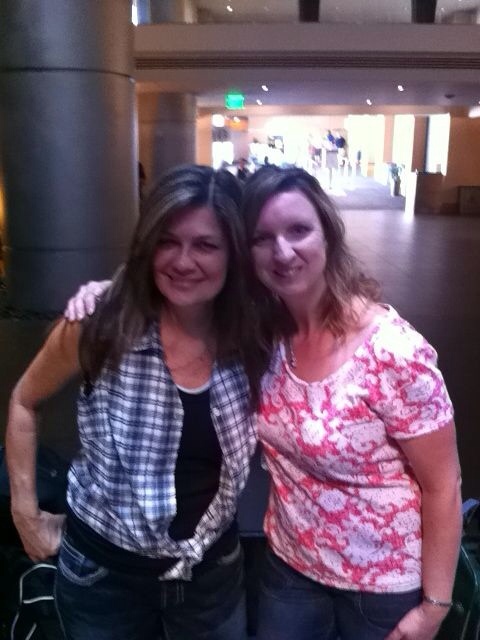 First, I met up with fellow Junk Warrior, Donna. I know y’all know this famous junkster as Funky Junk Interiors. Donna is such a sweet gal (errr, I mean a tough chick!) 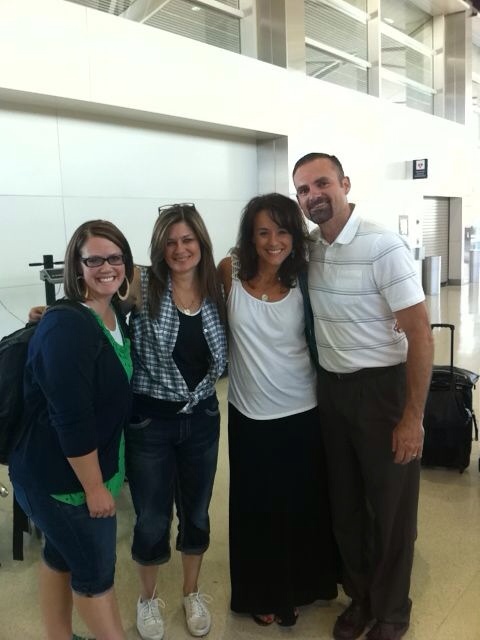 Then we met Brooke (All Things Thrifty), Cy and Traci (Beneath My Heart). And shortly after, met Lindsey (Better After – not photographed…yet!) 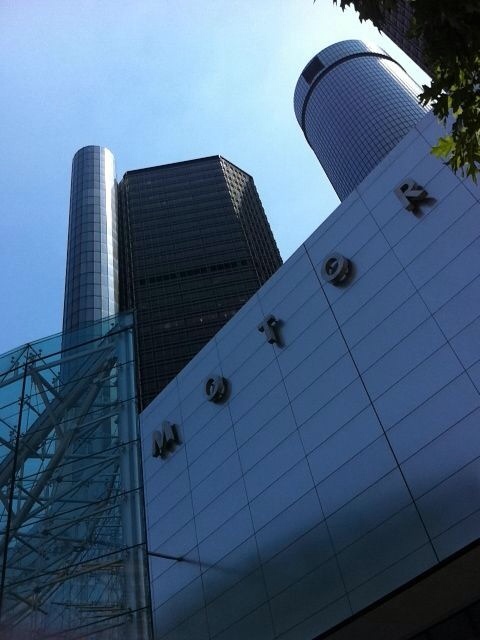 Next we piled our gear into a GMC Terrain and were whisked away to RenCen aka GMC Headquarters in downtown Detroit. 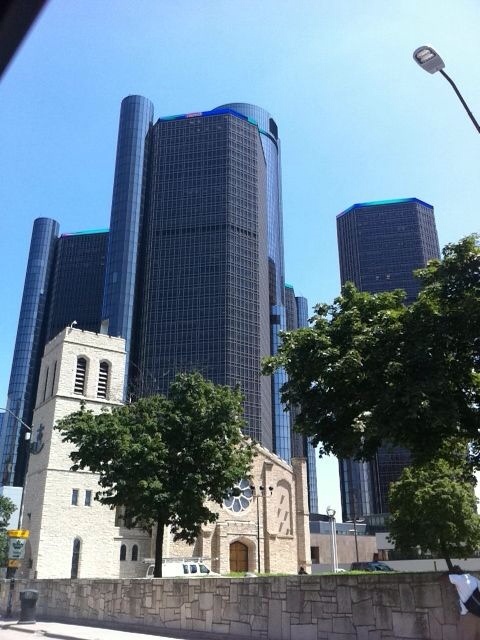 RenCen is impossible to miss. It is a cluster of buildings that erupt out of the ground in the middle of the city and appear to pierce the sky.

Kameya and Maryann gave us a tour and some background information about OnStar. (Okay, I’m going to stop and tell you right now that originally I thought OnStar was just some cheap sales gimmick. My opinion could not be further from the truth.) 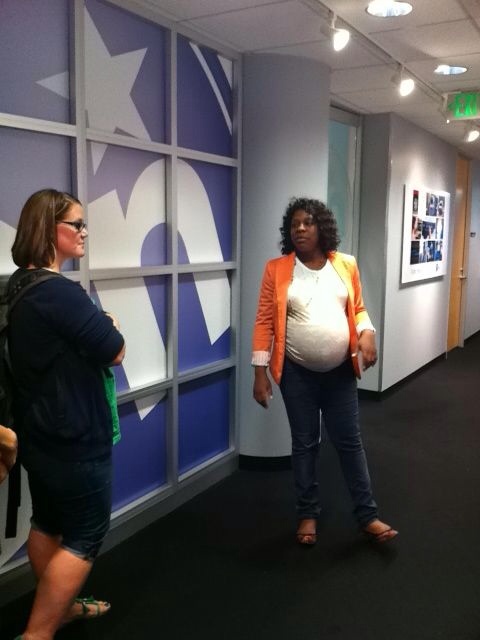 OnStar has responded to over 200,000 crashes since its inception. It has even been used by first responders to help assist them. A lot of times when towns lose power due to natural disasters, the OnStar system is the only communication people have with the outside world. 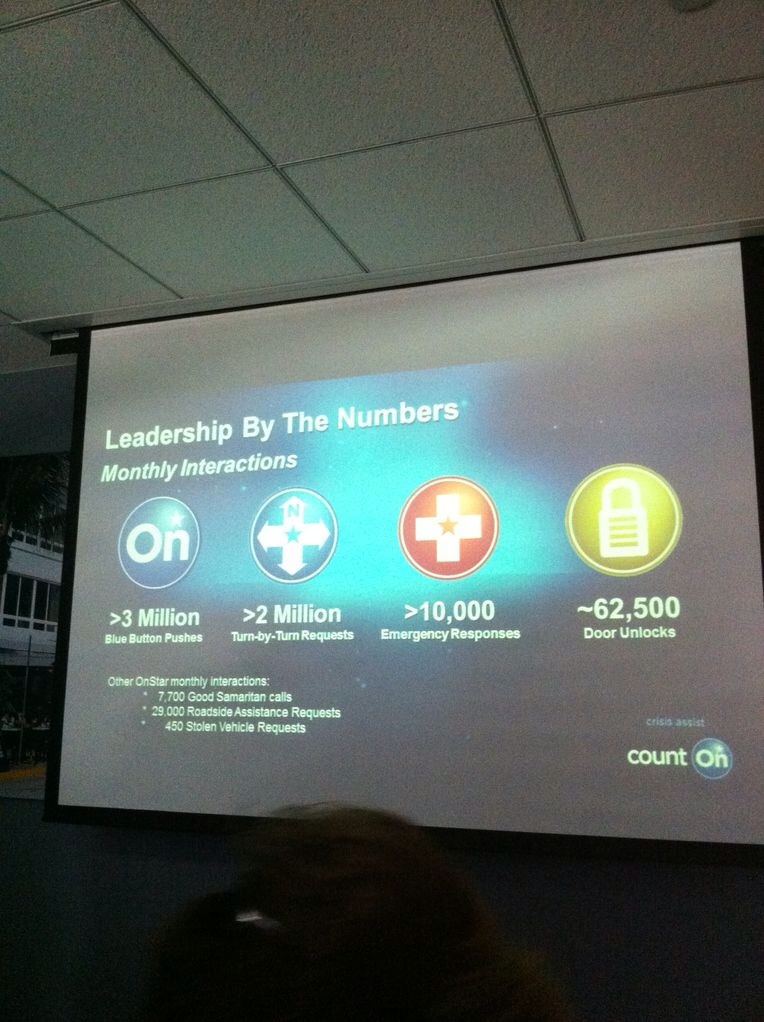 Another benefit of OnStar is it will automatically connect you with an OnStar assistant if your vehicle is in an accident. I don’t think I have to tell you what a big deal this is if you are unconscious or your cell phone has been launched to another location in the vehicle at impact.

At this point in the presentation I was seriously bummed because I wanted OnStar and was thinking you had to buy a GMC, Chevy, Buick or Cadillac. But, then I found out that you can purchase the OnStar system in a package that is integrated into the special OnStar rear view mirror. Cool!

Click here for more information about OnStar and how crazy cool it is.
After the tour we met our Junk Warrior vehicle, Quick Silver: 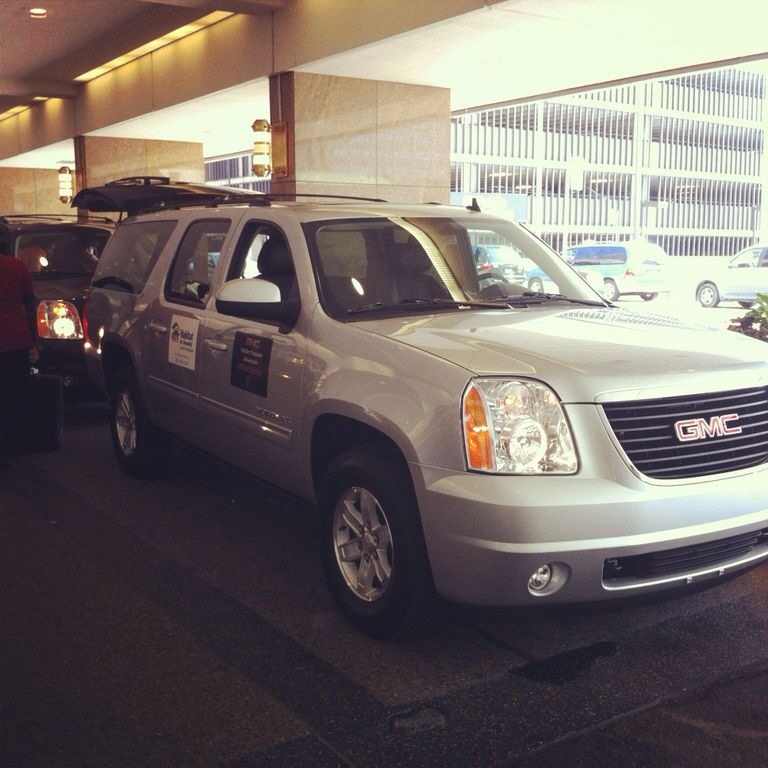 That was the name on the keyfob, so the name stuck.

The next destination was the Detroit Habitat ReStore on Mack Ave. If you live in the area, you HAVE to go there.They had some amazing furniture, lamps, and much much more!!! We were allowed to pick out one item for free for our top secret mission. I chose this antique console which has loads of storage potential. It could be used in a living room or entryway (but wait, I’ve already said too much!) 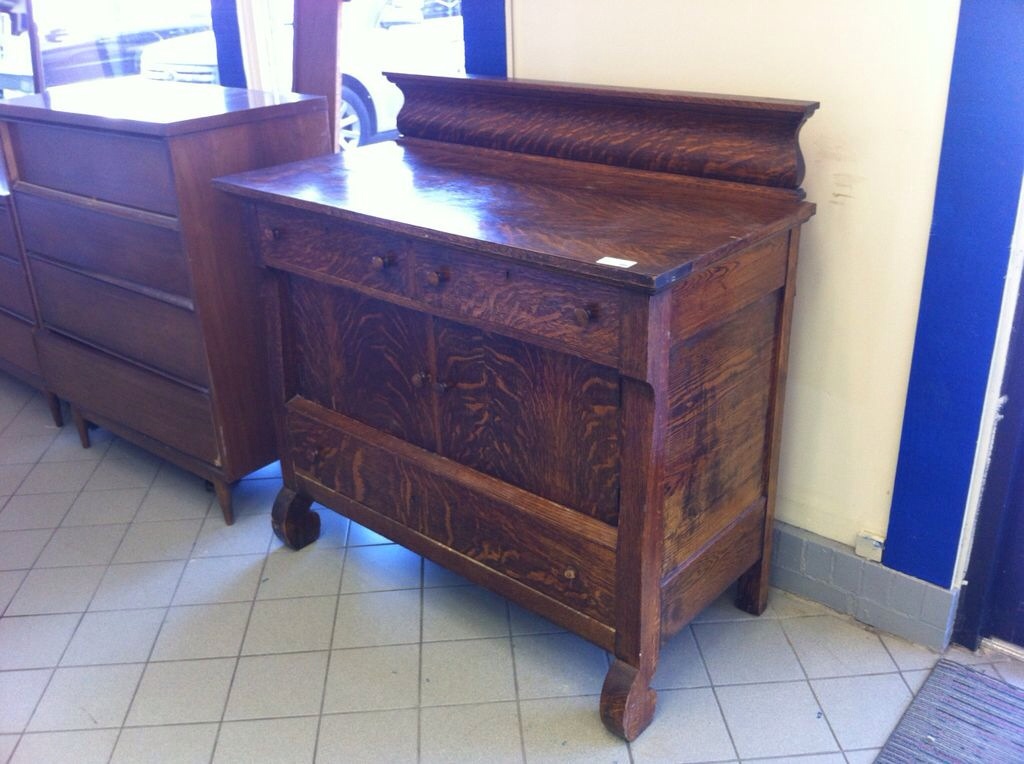 We bought some lamps and a few other fun things at the ReStore and shoved them in QuickSilver. Then we jumped inside and yelled, “Giddy Up!” and hauled our loot to the restaurant and then on to Jackson, MI to camp for the night (okay truth be told we slept in a hotel.) But, when we made it to Jackson, we were tired! I can’t complain too much because I hadn’t hopped time zones like some of the gals. But, I could have slept all night in the Yukon (because it is almost as big as my queen size bed!) 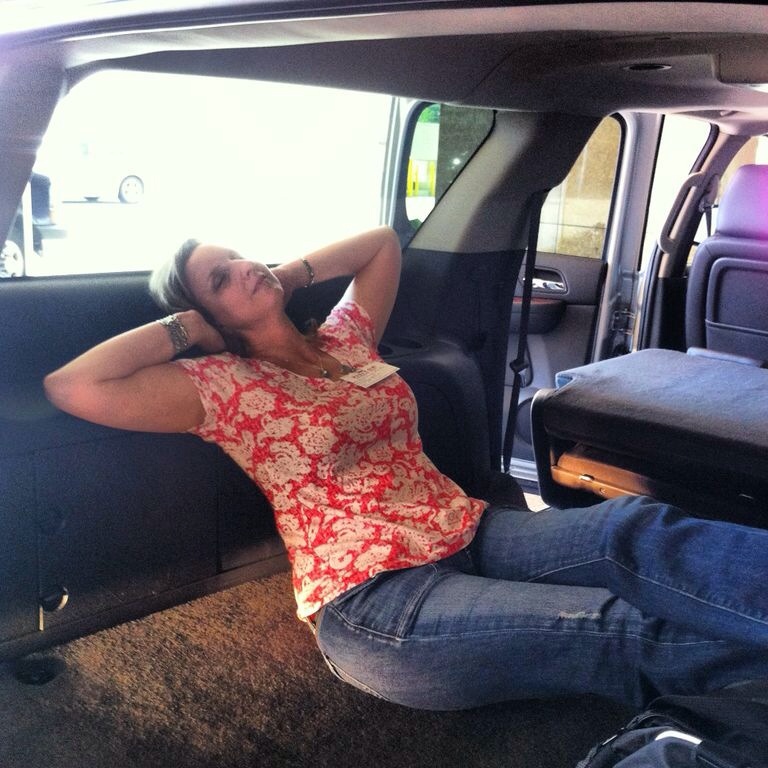 Everyone headed to bed except me, I had a secret rendevous with another fabulous DIY blogger. Kit from DIY Diva agreed to meet me at the hotel. Well, as all other power toting power tool bloggers know, there is no such thing as a quick hi and there is no such thing as an acquaintence. You’d think Kit and I were best friends separated by thousands of miles. Kit is truly my hero. She accomplishes anything she puts her mind too. For example, while she was building her old house she took classes and got her General Contractor license. This is after achieving her MBA. Seriously…anything she puts her mind to. Auto mechanic is on her horizon — I’m sure.

Kit was so sweet, she delivered a DIY emergency tool kit to me. She thought of everything! Tape measures, pocket knives, munchies, wine, bandaids (I guess for if you DWDIYing – Drilling while DIYing), WD40 and duct tape. 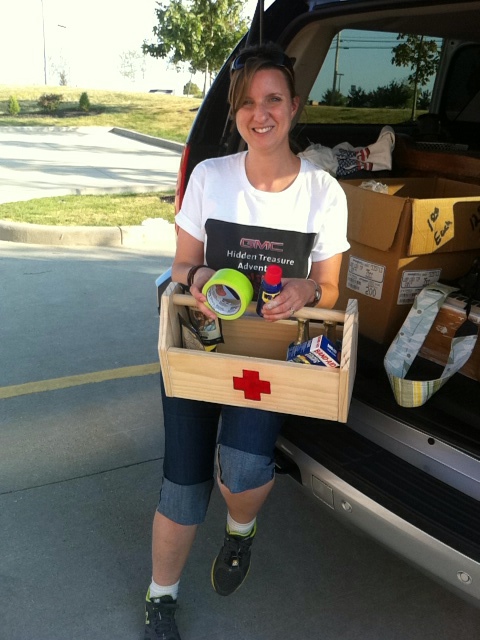 Then stupid silly tired me, forgot to take a picture of us. But Kit was well prepared and snapped this quick photo of us with our guns drawn (ha, get it? Drawn. LOL!) 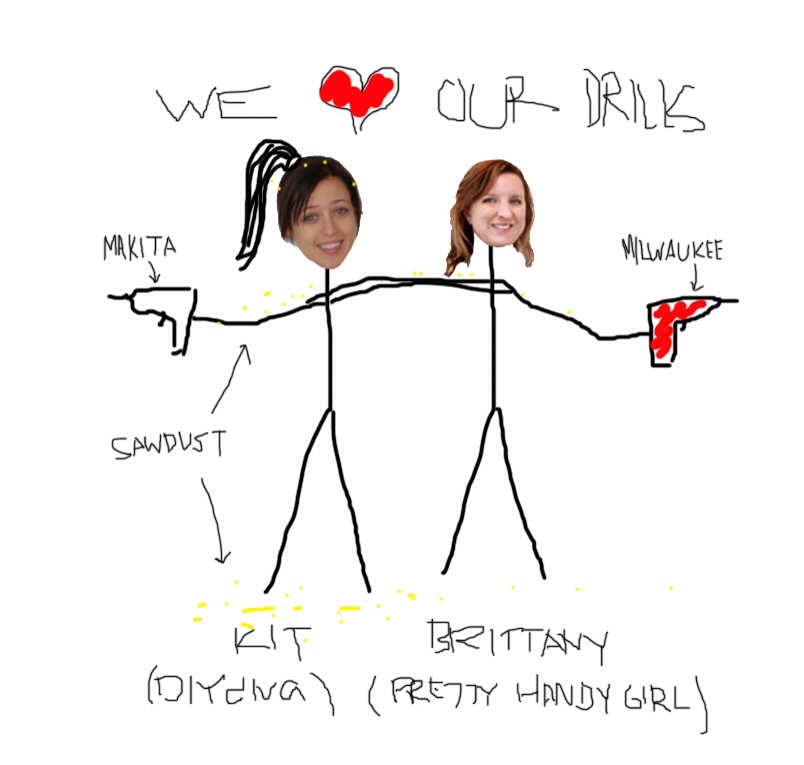 I finally went to sleep after 1:30am. Way too late for that 6:30am wake up call, but that’s why they call me a warrior!
I can’t wait to tell you about more of our adventures! Hang tight peeps…

Follow along our GMC Hidden Treasures Adventure by reading these other posts:
Day 2, Day 3, Day 4, Day 5 (the Reveal)
Lessons on Being a Junk Warrior
Make Your Own Warrior Bracelet
Disclosure: I was invited by GMC and OnStar (in conjunction with Habitat for Humanity) to join them on an excursion along the World’s Longest Yardsale. All my travel expenses were paid for. This is not a sponsored post, this is simply a post to update you on my experience. I was not told what to write about. All opinions are my own.
7 shares